Does it really turn all the way around? 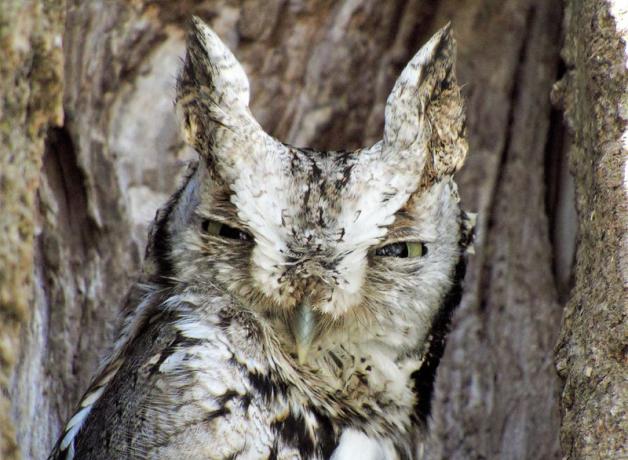 An owl's seeming ability to rotate its head in a complete circle is downright eerie. An owl's apparent head rotation is part illusion, part structural design. Because its eyes are fixed in their sockets, it must rotate its neck to look around. It can actually rotate its head about 270 degrees – a marvelous anatomical feat. You can learn more about this Eastern Screech-Owl at Cornell's AllAboutBirds.

[Eerie trill of an Eastern Screech-Owl]

Sometimes, owls strike us as downright spooky. The spine-tingling call of an Eastern Screech-Owl is a case in point.

[Eerie trill of an Eastern Screech-Owl]

Equally eerie is an owl’s seeming ability to rotate its head in a complete circle.

[A bit of theremin music]

Are spectral forces at work here, enabling an owl to spin its head 360 degrees?

Or do its neck feathers hide some anatomical secret?
Well, an owl’s apparent head rotation is part illusion, part structural design. To begin with, because an owl’s large eyes are fixed in their sockets, it must rotate its neck to look around.
And an owl will frequently perch with its head turned, looking over its shoulder to prevent predators from sneaking up behind. Hearing a noise from an unseen source, the owl rotates its head to the front and then around to the opposite shoulder in one quick, smooth movement, in what appears to be a full circle. Uncanny.
The actual rotation is about 270 degrees. With 14 neck vertebrae – that’s twice as many as you have – an owl can turn its head 90 degrees further than you can.
Even without any occult forces at work, this is a marvelous anatomical feat.
Get a good look at an Eastern Screech-Owl on our website, BirdNote.org. I’m Mary McCann.

National Public Radio has more on this subject!Eastern Screech Owl - More at All About Birds 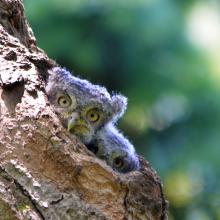 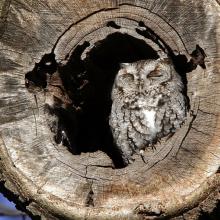 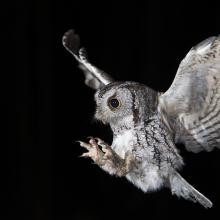