What are these birds, and why are they so angry? 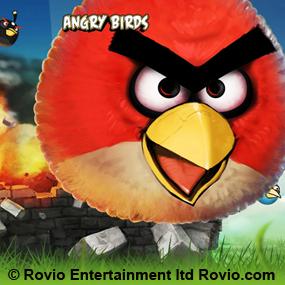 Every day in October 2011, nearly 3.5 million hours were spent playing Rovio's award-winning game, "Angry Birds." We don't know of too many birds whose eggs are stolen by pigs, but no bird is happy when its eggs are stolen. You might hear an American Robin, sounding its alarm. An angry Peregrine Falcon protects its nest. And the ultimate angry birds, American Crows, mob a raptor. Strangely enough - because the game was developed in Finland - the signature angry bird looks a lot like the cheerful Northern Cardinal of North America.

This is BirdNote!
[Music from Angry Birds, then chattering]
What are these birds and why are they so angry?
[Intro music from Angry Birds, mystery music]
Well, their eggs were stolen by a bunch of pigs, and the birds want them back.
[Chatter of Angry Birds]
Now, you can probably tell that these aren’t real birds. They’re from the game “Angry Birds.”  You may even have the game on your smartphone or other electronic device. Using a virtual slingshot, [Sound of slingshot being drawn] you hurl a variety of birds at the offending pigs. [Sound of flying bird] It’s an increasingly difficult and complex physics game. More than 40 million people play the game every month. And every day, nearly three and a half million hours are  ...m.m..m… spent, playing “Angry Birds.”
We don’t know of too many birds whose eggs are actually stolen by pigs*. But no bird is happy when its eggs are stolen.
Listen to this American Robin, sounding its alarm. [Alarm call of American Robin]
Here’s a pair of angry Peregrine Falcons, protecting their nest. [Cakking of Peregrine Falcon]
And the ultimate angry bird? The American Crow, mobbing a Red-tailed Hawk. [Crows mobbing a raptor]
Strangely enough – because the game was developed in Finland – the signature angry bird actually looks like the Northern Cardinal of North America. You can see photos of some real life angry birds on our website, BirdNote.org. I’m Michael Stein.
[Angry Birds music & chatter winding down, with snorts of pigs]
###
Music and sounds from the game Angry Birds © 2010-2011 Rovio Entertainment ltd.
Most bird sounds provided by The Macaulay Library of Natural Sounds at the Cornell Lab of Ornithology, Ithaca, New York. Sound recordist for American Robin: G.A. Keller. Recordist of Peregrine Falcon: Andrea L. Priori.
Calls of American Crows mobbing a raptor recorded by C. Peterson.
Producer: John Kessler
Executive Producer: Chris Peterson
© 2011 Tune In to Nature.org     October 2011   Narrator: Michael Stein

* wild boars on Hawaiian Islands, for the record