Why don't they fall off the branch? 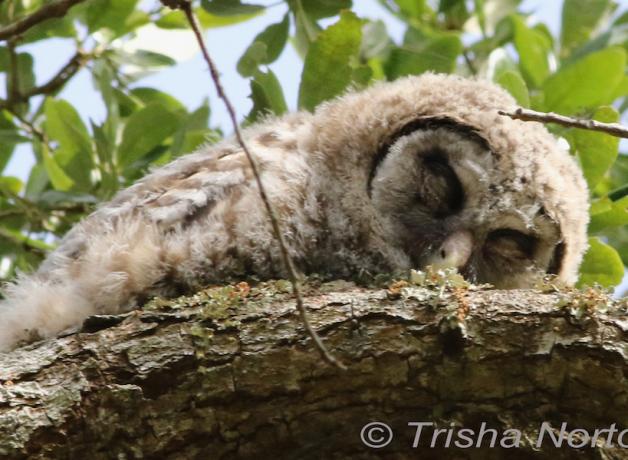 Keeping its talons tightly gripped on a branch, a Barred Owlet will sometimes lie down on its stomach, turn its head to the side, and fall asleep. A young owl doesn't fall out of the tree while it snoozes, because its back toe, the hallux, holds onto the branch. The hallux will not open or let go until the bird straightens its leg.

Sometimes birds fall directly into our lives. BirdNote listener Joseph Clark tells of discovering two Barred Owlets on the ground near his home in East Haddam, Connecticut. The young birds had fallen out of an ancient sugar maple and were being harassed by ravens. [Raucous raven calls]

Clark scared off the ravens, and with the guidance of Kasha Breau of the Connecticut Audubon center, got the young owls back up into the tree. The mother owl stayed nearby, keeping a close eye on the rescue.

Once the birds were safe, Breau advised Clark to observe the owlets napping, which they do during the day. What he saw delighted him. Keeping their talons tightly gripped on a branch, the owlets lay down on their stomachs, turned their heads to the side, and fell asleep. Their naps are short, and when they are asleep, they do not like to be awakened, even to be fed. [Barred Owlets screeching]

A young owl doesn’t fall out of the tree while it snoozes, because its back toe, the hallux, holds onto the branch. The hallux will not open or let go until the bird straightens its leg. Still, before they can fly, most owlets explore and often end up on the ground, sometimes dropping right into the middle of our lives.

Barred Owl – More at the Audubon Guide to North American BirdsBarred Owlet - More at All About BirdsDrop us a line and let us know what you think of BirdNote!