Conservation of habitat helps both birders and hunters! 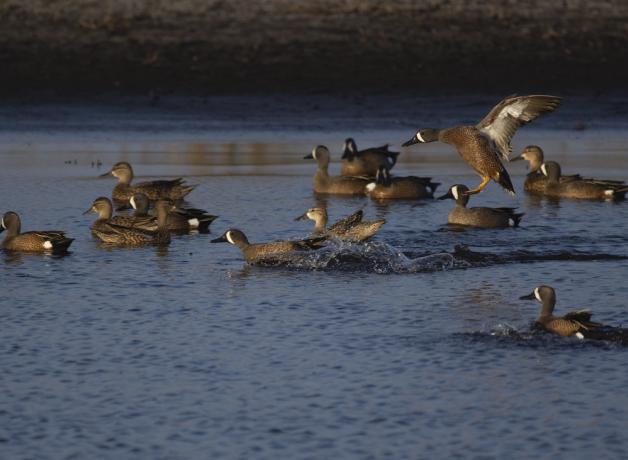 Thanks in part to the political will and financial contributions of waterfowl hunters and such organizations as Ducks Unlimited, natural wetlands that might otherwise have been lost have been preserved. Take a field trip with your local Audubon chapter to see what you can see. Maybe you'll see one of these Blue-winged Teal. You can learn more about duck stamps and how they help protect habitat for migratory waterfowl at Ducks.org.

Birders and Hunters—Conserving Wetlands and Waterfowl

This is BirdNote.
[Hen Mallard hail call]
When a birder meets a duck hunter on a trail through a marsh, it might seem they have little in common. This is an unfortunate misperception, because the two often share essential values: a fascination with waterfowl and a commitment to conserving wetlands.
[Canada Goose flock calls]
Thanks to the political will and financial contributions of waterfowl hunters and organizations like Ducks Unlimited, natural wetlands that might otherwise have been lost have been preserved. Waterfowl hunters dedicate millions of dollars every year to the conservation of wetlands. Some of the wildlife refuges we treasure were purchased with funds from the sale of duck stamps to hunters and other conservationists.
[Marsh sounds with mix of Mallard and Pintail gabbling and quacking]
The overall impact of hunting on waterfowl numbers is modest, and it’s regulated by scientific management. Ducks and geese persist in great numbers after the hunting season ends. The key to their continued abundance is the conservation of habitat. But waterfowl habitat is diminishing across North America. This is where we need the shared efforts of those natural, if at times unacknowledged, allies: birders and hunters.
[Mallards enjoying a wetland]
Learn how to get your own duck stamp. Begin at our website, BirdNote.org. I’m Michael Stein.
###
Bird audio provided by The Macaulay Library of Natural Sounds at the Cornell Lab of Ornithology, Ithaca, New York. Canada Goose flock recorded by W.W.H. Gunn. Female Mallard quack and chattering males recorded by A.A. Allen.
Producer: John Kessler
Executive Producer: Chris Peterson
© 2013 Tune In to Nature.org           February 2017/2022  Narrator: Michael Stein