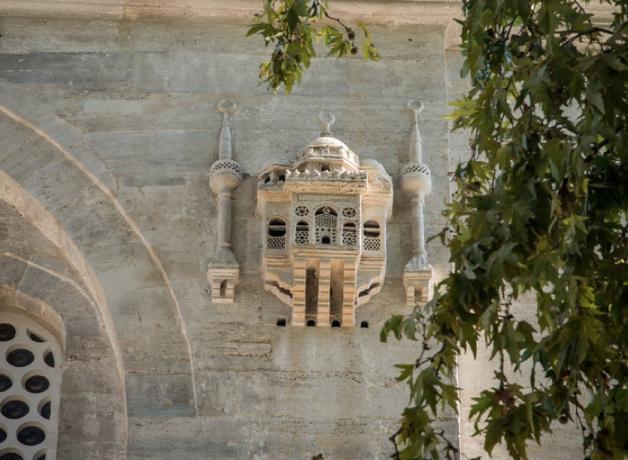 It’s easy to imagine that putting up a birdhouse or nestbox is a relatively recent practice. But in Turkey, it has a long history. Since at least the 13th century and continuing through the period of Ottoman rule, birdhouses were placed on all sorts of structures: mosques (like this one – the Yeni Valide Mosque in Üsküdar, Istanbul, Turkey), schools, libraries, houses, tombs, bridges, and palaces. In this culture, birdhouses were viewed as an expression of love and compassion for animals. The Ottomans even endowed charities to provide food and water for birds and to care for sick birds.

A Long History of Birdhouses in Turkey

This is BirdNote.
It’s easy to imagine that putting up a birdhouse or nestbox is a recent practice born of our increased environmental consciousness. Or tied to the growth of backyard birdwatching. But in fact, it has a long history – and nowhere more so than in Turkey.
Since at least the 13th Century, and continuing through the long period of Ottoman rule, people expressed a close connection with wild birds. It was thought that doves guarded lovers and that migrating storks visited holy places. And that those houses and buildings on which swallows nested would be protected from fire.
Birdhouses were placed on all sorts of structures: mosques, schools, libraries, houses, tombs, bridges, even palaces. They were built of wood, brick, plaster, and stone. Dovecotes, structures built especially to accommodate Rock Pigeons, adorned many buildings. The Ottomans even endowed charities to provide food and water for birds and to take care of sick birds.
Birdhouses were viewed as an expression of love and compassion for animals. And while some were simple, others were magnificent, built as tiny scale models of the buildings they adorned.
Tiny palaces for birds, attached to the immense palaces of rulers.
For BirdNote, I’m Mary McCann.
###
Bird sounds provided by The Macaulay Library of Natural Sounds at the Cornell Lab of Ornithology, Ithaca, New York. Ambience from Common Nightingale, Xeno-Canto [XC184405] recorded by Kareem Ali Boyla, at Karakoca, Karacabey, Bursa Province, Turkey.
BirdNote's theme music was composed and played by Nancy Rumbel and John Kessler
Producer: John Kessler
Executive Producer: Dominic Black
© 2016 Tune In to Nature.org    July 2016/2019   Narrator: Mary McCann

Let us conclude with a few lines from Mehmet Zaman Sacliolu’s poem, ‘Bird Houses’;
Bird Houses
The outer walls of houses should be bird houses
That take wing when children laugh.
Even if it’s winter outside,
The summer sun should rise inside the walls
And happiness will also warm the birds.