Learning to identify birds by their songs 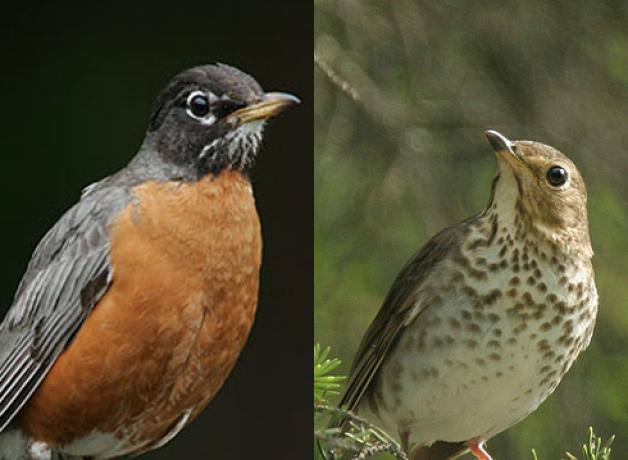 It can be difficult to identify a bird by its appearance, and just as challenging to do so by its song. But birding by ear is a great way to get to know birds. A blind birder in Kitsap County, Washington, was puzzled by a haunting bird song. She thought it might be a special song of the American Robin (seen left here). It turned out instead to be the song of a Swainson's Thrush (right). To hear the songs of these and other thrushes, visit the Macaulay Library. We'll help you find birding-by-ear resources, too.

[Ambient from the Eastern Bluebird track]

What’s it like to go birdwatching if you can’t see the birds? Close your eyes for a moment, and listen. [Song of Eastern Bluebird]

A professor of political science at Mt. Holyoke, Donald Morgan, was blinded at age 16. As an adult, he liked to walk the roads of rural New England, listening to birds of the open country, especially bluebirds [Song of Eastern Bluebird]. His favorite woodland bird was the ethereal Hermit Thrush [Song of Hermit Thrush].

It can be difficult to identify a bird by its appearance, and just as challenging to do so by its song. Blind listener Jan LaPrath told us that a certain birdsong had haunted her. [Song of a Swainson’s Thrush] It seemed familiar, but she couldn’t quite identify it. Was it an American Robin?  [Evening song of American Robin]

On our website, you’ll find resources for birding by ear. And you can listen again to the songs of the four thrushes you just heard: the Eastern Bluebird, the American Robin, the Hermit Thrush and the Swainson’s Thrush.