...the most surprising birds in the world 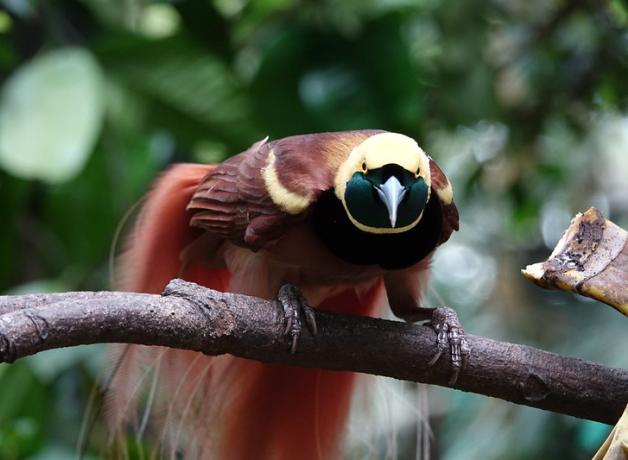 There's a world of birds out there -- Learn more about Birds-of-Paradise at Cornell's Bird of Paradise Project website.

It’s early morning on the island of New Guinea. The lowland forest erupts with the crowing calls of male Raggiana Birds-of-Paradise. [Raggiana Bird-of-Paradise]

Groups of male Raggiana Birds-of-Paradise perform elaborate displays to attract females. The size of small crows, the males have a yellow head, bright green throat, and a lush mass of fine, russet-orange plumes that hang well beyond their tails. In a sequence known as the “flower display,” the males hang upside down with their wings flexed downward, while flaunting those russet plumes upward. [Raggiana Bird-of-Paradise]

“Birds-of-Paradise”— an aptly exotic name for this most varied and extravagantly decorated group of birds. All forty-three species are found on New Guinea, or nearby.
Picture one named the Ribbon-tailed Astrapia, as it flies along the forest edge. [Ribbon-tailed Astrapia] With an emerald-green head and velvety black body, the Astrapia trails two slender, white tail-plumes a full three feet behind its body. They undulate like fine ribbons in the breeze. 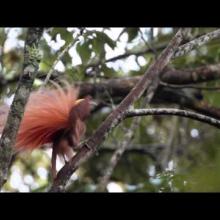 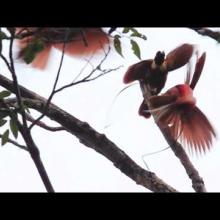 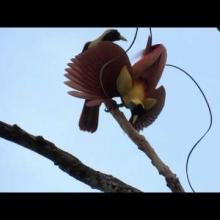