Birds on the Polar Bears’ Menu

A warming Arctic means the bears’ menu is changing. 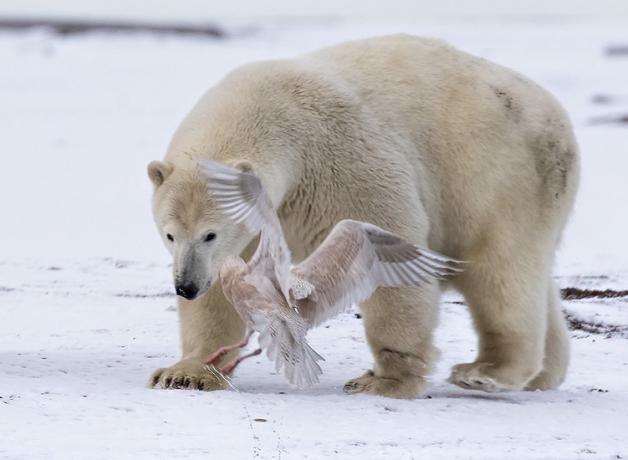 Polar bears use Arctic sea ice to hunt seals, but a warming Arctic means the bears have to return to land earlier in the year. Their arrival coincides with droves of birds sitting on eggs. A single clutch of eggs isn’t enough to satisfy a bear, so they go from nest to nest, sometimes eating their way through a colony. Scientists designed a bear-proof nest case to protect Black Guillemot eggs.

Birds on the Polar Bears’ Menu

This is BirdNote.
Polar bears, mighty predators of the Arctic, hunt seals and their pups on sea ice. But a warming Arctic means longer seasons without ice and the early return of polar bears to land. Their untimely arrival coincides with droves of birds sitting on a bounty of eggs.
[Cacophony of Thick-billed Murres, https://www.xeno-canto.org/141228, 0.05-.11]
Depending on where a polar bear is in the Arctic, there may be Common Eiders, Thick-billed Murres (pron. murz, like purrs), Little Auks, Glaucous Gulls, Lesser Snow Geese and Barnacle Geese on the menu. While bears feed primarily on eggs and chicks, they will take the occasional adult if they can grab one.
[Alarm call of a female eider with chicks, https://macaulaylibrary.org/asset/279182411, 0.02-.11]
Unfortunately, a single clutch of eggs is no substitute for a seal rich in fat. So, hungry polar bears go from one nest to another, and then another, until they’ve eaten their way through pretty much all of the nests in a colony.
The fate of these birds is unknown, but at least one bird is getting some help. On Cooper Island, off the coast of Alaska, where nesting Black Guillemots (pron. GILL-uh-mahtz) are vulnerable to predation, scientists have placed polar bear-proof nest cases to give the birds a fighting chance.
[Black Guillemot chick squeaking, https://macaulaylibrary.org/asset/174688311, 0.01-.04]
For BirdNote, I’m Michael Stein.
###
Senior Producer: John Kessler
Production Manager: Allison Wilson
Producer: Mark Bramhill
Associate Producer: Ellen Blackstone
Digital Producer: Conor Gearin
Bird sounds provided by The Macaulay Library of Natural Sounds at the Cornell Lab of Ornithology, Ithaca, New York. Thick-billed Murre Xeno Canto 141228 recorded by A. Spencer, Common Eider ML 279182411 recorded by A. Spencer, and Black Guillemot ML 174688311 recorded by P. Davis.
BirdNote’s theme was composed and played by Nancy Rumbel and John Kessler.
© 2021 BirdNote   July 2021    Narrator: Michael Stein