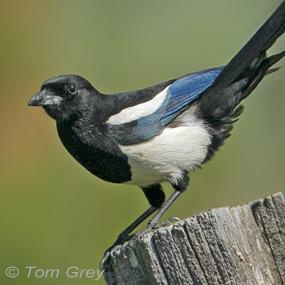 The Black-billed Magpie is a familiar sight throughout much of the West. The magpie's bulky nest is a rough sphere of sticks nearly three feet across, with entrance ports on the sides. Take a field trip with your local Audubon and see what you can see!

Support comes from Sasquatch Books, announcing The Breath of a Whale, stories of nature's remarkable creatures of the deep, from the author of The Hidden Lives of Owls.

BirdNote®
Black-billed Magpie
Adapted from a script by Bob Sundstrom

[Cows and rooster, morning ranch country ambient sounds]
This is BirdNote.
[Black-billed Magpies’ raspy calls]
It’s a cool morning in the ranch country of the West. A Black-billed Magpie cuts a dash amidst the open habitat. Flying parallel to the road with deliberate wing beats, it flashes its black-and-white wings like a semaphore, its tail fluttering behind. The plume's longer than its body.
[Black-billed Magpies’ raspy calls]
The March trees are still bare. The magpie's raspy call is bold as brass. Like its nest: a rough, bulky sphere of sticks nearly three feet across, with entrance ports on the sides, sitting in plain view. Black-billed Magpies are omnivorous, like their close relations the jays and crows.
They'll even hitch a ride on a steer to pluck ticks from its hide. Which goes some way to explain-ing why magpies are such…survivors. The bison herds they once depended upon are greatly diminished. And although they’ve had a long history of run-ins with ranchers, they've persisted.
[Black-billed Magpies’ raspy calls]
And when the morning light catches one, perching, just right, its wings and tail shimmer with iridescent blue and green.
For BirdNote, I’m Michael Stein.
[Black-billed Magpies’ raspy calls]
###
Call of the Magpie provided by The Macaulay Library of Natural Sounds at the Cornell Lab of Ornithology, Ithaca, New York, recorded by R.S. Little. Mooing of cows by R.W. Simmers and B. Veprintsev.
BirdNote’s theme music was composed and played by Nancy Rumbel and John Kessler.
Producer: John Kessler
Executive Producer: Dominic Black
© 2015 Tune In to Nature.org     March 2017/2019     Narrator: Michael Stein 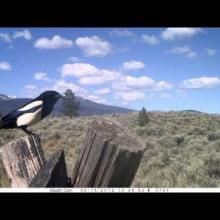 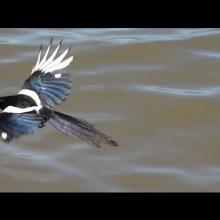