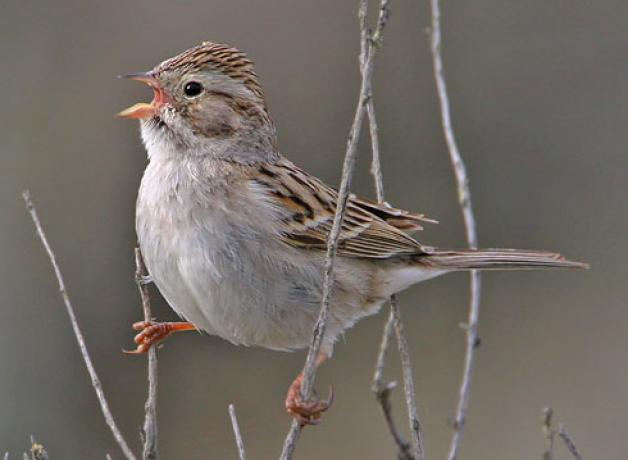 One of the most musical and complex bird songs in the US is that of the Brewer's Sparrow. It's a veritable aria, ringing forth from the sagebrush of Eastern Washington's Columbia Basin. Shrub-steppe is disappearing from the interior west as it is cleared for irrigated crops. The quintessential drylands bird, the Brewer's Sparrow can survive for an extended period of time with no supplemental water, getting all the water it needs from seeds and arthropods.

[Long song of the Brewer’s Sparrow]

Every spring, one of the most musical and complex bird songs on the continent rings forth from the sagebrush of the Columbia Basin in Washington State.

The Brewer’s Sparrow, a migratory songbird that winters mostly in western Mexico, returns in April to the sage. Sagebrush habitat, often called shrub-steppe, is a common landscape of the interior West. However, each year more and more of it is being cleared for irrigated crops and development.

The diminutive Brewer’s Sparrow shares its nesting habitat with other fancy singers like the long-winded Sage Thrasher and the melodic Vesper Sparrow. All three of these birds are sandy brown in color, blending so seamlessly with their surroundings that only a sharp eye can pick them out. Yet even among this accomplished company, the Brewer’s song stands apart. While most birds offer a melody, the Brewer’s Sparrow seems to perform an entire aria.

[Song of the Brewer’s Sparrow]

Find all our episodes and a lot more information about birds at our website BirdNote.org. I’m Mary McCann.

More about the Brewer's Sparrow at Cornell's All About Birds