A Building Manager Shows the Way 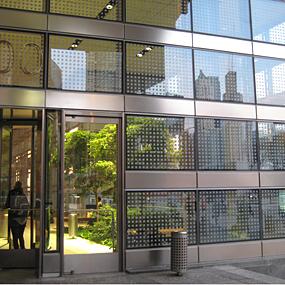 Geoff Credi is the facilities manager for an impressive glass building in Chicago. In 2004, Credi learned about the devastating problem of birds colliding with glass. As a result, the building he manages became one of the first to participate in the Lights Out Chicago program, voluntarily turning out the lights at night. If your city doesn't yet support Lights Out, encourage your city council to join the effort! You'll find a toolkit at the Lights Out Chicago website.

This is BirdNote!
Geoff Credi is facilities manager for 300 East Randolph, an impressive glass
building near Chicago’s Grant Park.
“Our management’s always been very pro-active from an environmental perspective – whether it be green roofs or bird collision efforts. It makes sense for us to add value to our property, to become a good corporate citizen, and do things that make financial sense, especially during the migration season.”

In 2004, Credi learned from Chicago Bird Collision Monitors about the huge problem of birds colliding with glass. As a result, the building he manages became one of the first to participate in Lights Out!, voluntarily turning out the lights at night to save the lives of migrating birds.
“Turning the lights off at the top of the building during migration season is no cost…actually saves us money and energy…”

But Geoff and his team went further. They developed a way to track where, and how often, birds were striking the building during night and day.
“What we found was most of our activity, is in the lobby area, a more ground-level environment, not just 300 feet in the air. Most of this stuff is happening 50 feet and down, so we can get to that. It doesn’t cost a fortune.  We don’t have to change 5,000 panels of glass…which is something that buildings or owners would not be able to do.”

For example, in the lobby, they applied a pleasing, visible pattern to the transparent doors, and moved a big potted tree away from the lobby windows where birds can’t see it.
To see a slideshow by American Bird Conservancy of other creative and practical bird-friendly solutions, begin at our website, birdnote.org.

Geoff Credi is the facilities manager for 300 East Randolph. The owner of the building is Health Care Service Corporation. Among its tenants, the building houses Blue Cross Blue Shield of Illinois (Credi’s employer), Baker McKenzie Law, and McKenzie Consulting.