An Aleut tradition hangs on 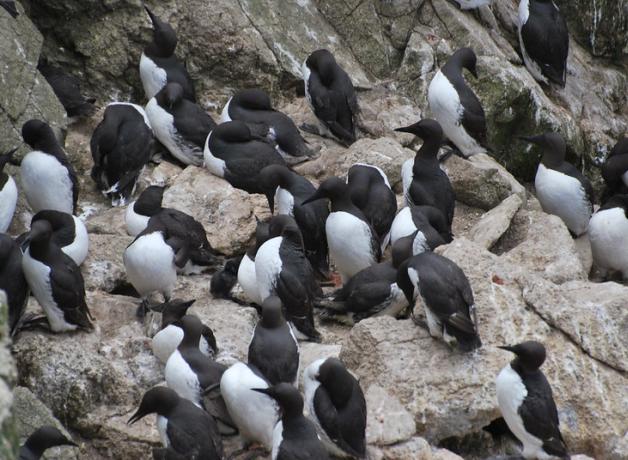 On St. Paul Island in the Bering Sea, Ivan Melovidov collects speckled murre eggs in the traditional Aleut way, by descending over the edge of a cliff. With a rope tied around his waist he runs along a cliff-face, dodging fulmars, seabirds known for projecting foul-smelling stomach oil with remarkable accuracy. Ivan harvests from only one area each year and distributes the eggs to community members.

Hear more about the Pribilof Islands and the challenges seabirds face on the first episode of the Threatened podcast.

On St. Paul, one of the tiny Pribilof Islands in the Bering Sea, there’s a 35-, 40-foot rocky cliff. A riot of nesting seabirds come here in summertime… including the murres — clean-cut black-and-white birds.

Ivan: You can smell the urine from the birds.

Ivan Melovidov has a special role here. Speckled murre eggs are tucked into the cliff face, and he collects them in the traditional Aleut way — by descending over the edge. He’s the only one on the island who still knows how to do it.

Ivan: When I go down, I have a line tied to me around my waist. If you let go of that line, you turn upside down.

Ivan: You gotta watch out for that. You get that in your face, it’ll blind you.

Once Ivan’s in position, he maximizes his egg-collecting by running along the cliff face.

Ivan: Once I get my pouch filled up as much as I could, I tell them “hoist me up,” and I just walk up the cliff.

Ivan harvests from only one area each year. He distributes the eggs to anyone who wants them — for baking or just frying up and eating. But he doesn’t want this tradition to end with him. So he’s working with a high-schooler, showing him the ropes. And Ivan’s hoping that he’ll pass the know-how along to his friends.

To hear more about the Pribilof Islands and the challenges seabirds face, subscribe to “Threatened” wherever you get your podcasts.

Common Murre – More at All About BirdsAleutian Pribilof Islands AssociationWhy Are Murre Eggs So Pointy?