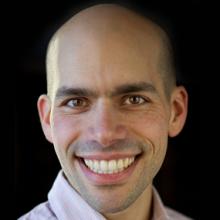 Ari Daniel has always been drawn to science and the natural world. As a kid, he packed his green Wildlife Treasury box full of species cards. As a graduate student, Ari trained gray seal pups (Halichoerus grypus) for his master’s degree at the University of St. Andrews. Then, he helped tag wild Norwegian killer whales (Orcinus orca) for his Ph.D. at MIT and the Woods Hole Oceanographic Institution.

These days, as Senior Digital Producer for NOVA and an independent science reporter for outlets including public radio, Ari works with a species he’s better equipped to understand — Homo sapiens. He has reported on science topics across five continents. He is a co-recipient of the AAAS Kavli Science Journalism Gold Award for his radio stories on glaciers and climate change in Greenland and Iceland. Ari also co-produces the Boston branch of Story Collider, a live storytelling show about science.

In the fifth grade, Ari won the “Most Contagious Smile” award.

Browse shows that Ari has contributed to.