They don't fly well in the air, but under water? That's another story! 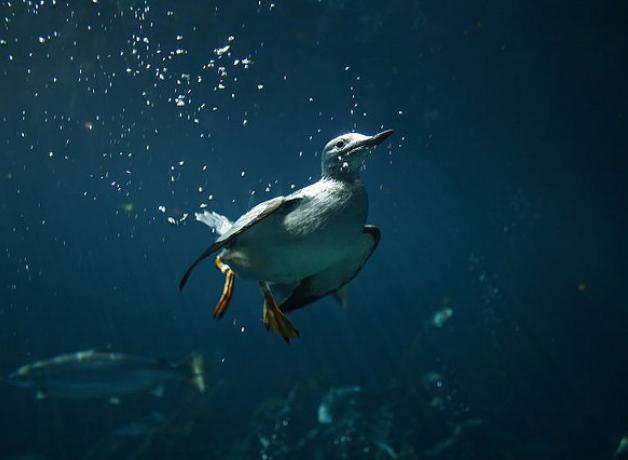 The Common Murre is among the few species of birds that can "fly" under water. When above the water, the 18"-long murre must flap frantically to stay aloft. But beneath the waves, with its flipper-like wings partly extended, it is a streamlined, masterful swimmer. Common Murres, black and white torpedoes with feathers, chase down fish even several hundred feet below the surface. Cornell's Macaulay Library offers audio and video of Common Murres.

If you ever miss a BirdNote, you can always get the latest episode. Just tell your smart speaker, “Play the podcast BirdNote.” Learn more on our website, BirdNote.org.

This is BirdNote.
[Seawater sounds]
The miracle of flight – that enviable ability is what birds are best known for. Yet among the nearly 10,000 bird species worldwide, only a few dozen can fly under water. The Common Murre is among them.
[Calls of adult Common Murre]
We most often think of the penguins of southern latitudes as underwater fliers par excellence. In the Northern Hemisphere, it’s the family of seabirds called alcids or auks that wing their way under the marine surface. Puffins [Call of a Tufted Puffin], murrelets, guillemots [call of Pigeon Guillemot], and Common Murres are all underwater fliers.
[Seawater sounds along with call of Common Murre]
When flying above the water, the 18”-long Common Murres must flap frantically to stay aloft. But beneath the waves, using their flipper-like wings, they are streamlined, masterful swimmers, black-and-white torpedoes chasing fish even at depths of several hundred feet. To reduce drag, the murre holds its wings only partly extended, flying through the submarine world with powerful strokes.
[Seawater sounds]
Several hundred feet under the water – amazing, isn’t it. [pause]
For BirdNote, I’m Mary McCann.