A spectacle of sight, sound, and smell! 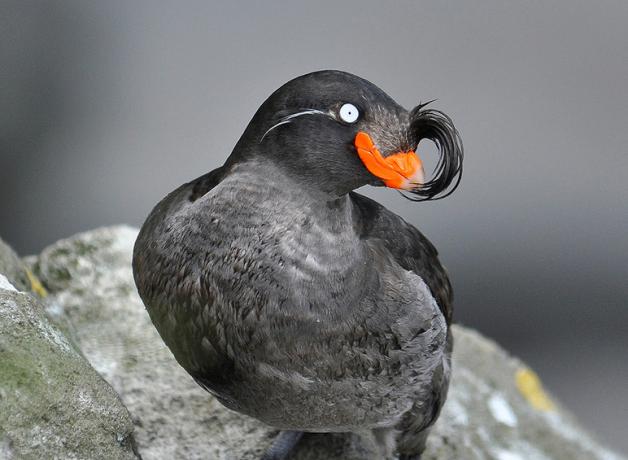 The Bering Sea in winter, framed as it is by Alaska and Siberia, is frigid, stormy, and dark. But remarkably, some birds seem right at home there. The Crested Auklet is one such bird. And they have some unique qualities. Crested Auklets bark like Chihuahuas. Also, these seabirds exude an odor of oranges from a chemical they produce that repels ticks. They nest in immense colonies on Bering Sea islands, and remain nearby through winter, in flocks of many thousands. The auklets present a superb natural spectacle - sight, sound, and smell!

This is BirdNote. [Wind and waves]

The Bering Sea in winter is a realm to which most people – aside from some very hardy fishermen – give a wide berth. Winter in this northern sea framed by Alaska and Siberia is frigid, stormy, and dark. But remarkably, some birds seem right at home here.

A petite cousin of puffins, the Crested Auklet stands 10 inches high, weighs nine ounces, and is feathered in charcoal gray. This little seabird takes its name from a comical crest curling out over the top of its large, orange bill. If that’s not whimsical enough, Crested Auklets bark like Chihuahuas. [Sounds of Crested Auklets barking calls] And to top that off, the seabirds exude an odor of oranges from a chemical they produce that repels bothersome ticks.

Today’s show brought to you by the Bobolink Foundation. For BirdNote, I’m Mary McCann. 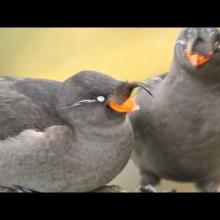 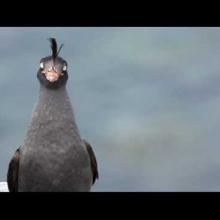