Don't mess with crows when they're nesting! 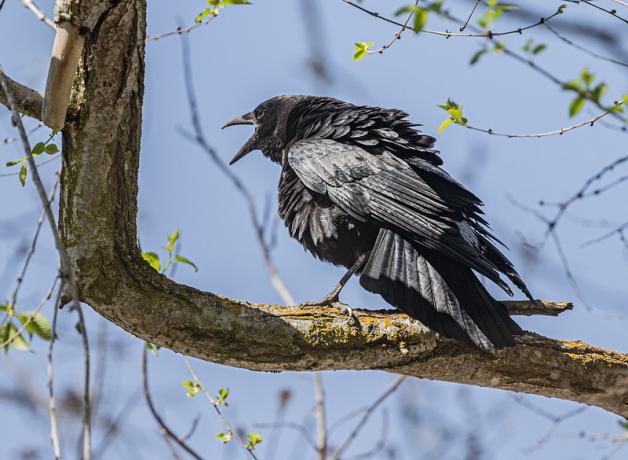 Although the American Crow may seem blasé about pillaging another bird's nest, it regards a threat to its own young as a punishable offense. To protect their nest, adult crows dive-bomb people, cats, and other animals, and even other birds. Young crows fledge when they are around five or six weeks old, and their parents continue to care for them for months.

Although the American Crow may seem rather blasé about pillaging another bird’s nest, like that of this House Finch [distress call of the House Finch] it regards a threat to its own young as a punishable offense. Crows are territorial, very protective of their food sources, ferocious and fearless as parents.  [Call of American Crow]

Young crows fledge, or leave the nest, when they are around five or six weeks old and nearly the same size as adults. But they still can’t feed or protect themselves. Fortunately, their parents look out for them for months. In fact, immature crows don’t mate until they are at least two years old.  They often stay with the family all that time, learning from the parents and even helping with next year’s brood.

To protect their young, adult crows dive-bomb people, cats, and other birds or animals. They strike with their feet, whip with their wings, and peck if they get a chance. The best thing you can do when there are baby crows around is keep your distance! [More calls of American Crows defending their nest]

Sign up for a preview - & photos! - of next week's showsAudubon Field Guide: American CrowLearn more about the American Crow at Cornell's All About Birds