More than just cleaning - it's courtship, too! 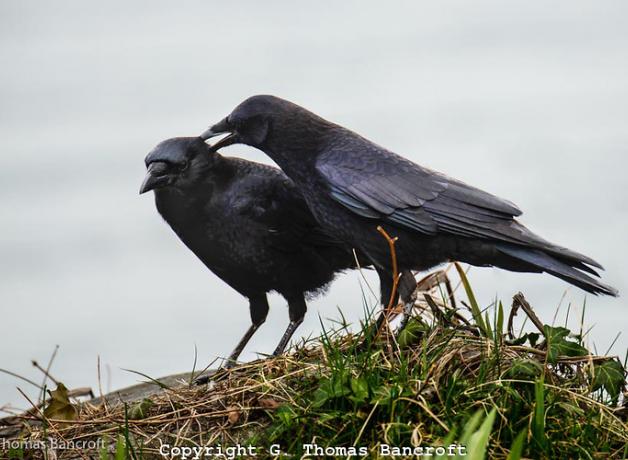 American Crows and other birds groom each other while sitting side by side on a wire or branch. One stretches out its neck, and the groomer, or preener, twirls individual feathers in its beak, often starting at the back of the head and working around to the front. This grooming, known as "allopreening," strengthens the bond of the pair - and keeps their feathers in good shape, too.

Be sure to check out the video!

(See the limerick at the bottom of the transcript.)
BirdNote®
Crows Preening
Written by Ellen Blackstone
This is BirdNote!
[Calls of Gray-headed Lovebirds]
Parrots of all kinds engage in a public display of affection called “allopreening,” and it’s probably this activity that gave lovebirds their name. Lovebirds may have the reputation for amour, but crows show affection, too!
[Vocalizations of a pair of American Crows, throughout]
You can see it a lot, at this time of year. Male and female sit side by side on a wire or branch, often near their nest tree. One stretches out its neck, inviting the other to groom its feathers. The groomer, or preener, twirls individual feathers in its beak, often starting at the back of the head and working around to the front. The bird being groomed turns its head upward, so the preener can reach the feathers under its chin. Its eyes close slightly, making it seem as if the bird is in a daze. The preener pauses; the preenee remains absolutely still, mesmerized. It’s even mesmerizing to watch.
Allopreening strengthens the pair bond between the birds. And it keeps their feathers in good shape, too.
Check out our website and you’ll find a limerick – believe it or not -- about allopreening. There’s a video, too. One crow preening another. See if you aren’t mesmerized. Find them at BirdNote.org. I’m Mary McCann.
[More vocalization of crows]
###
Bird calls provided by The Macaulay Library of Natural Sounds at the Cornell Lab of Ornithology, Ithaca, New York. Calls of Gray-headed Lovebirds [97517] recorded by L. Wilme. Vocalizations of crow pair [82044] by E. Brown.
Producer: John Kessler
Executive Producer: Chris Peterson
© 2014 Tune In to Nature.org     February 2014/2019     Narrator: Mary McCann
ID #021306AMCRKPLU    AMCR-05b
http://www.youtube.com/watch?v=4KmDT6txbVA
Steven Brown’s limerick is #6484 at http://www.oedilf.com:
It's useful, if you are a bird,
To know what is meant by this word,
Because allopreening
Refers to the cleaning
Of mates during courtship, we've heard.