The birds could identify threatening people! 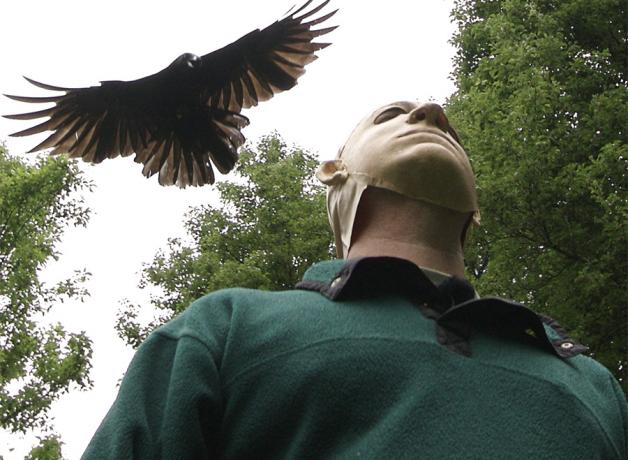 To find out if a crow can recognize an individual human face, Professor John Marzluff of the University of Washington wore a mask while trapping, banding, and then releasing seven American Crows on campus. Later, when he walked through the campus wearing the mask, it was automatic! A big group of birds scolded and divebombed him. He thinks it's a benefit to the birds' survival to point out and recognize challenges in their environment. Watch a video and learn more at ScienceMag.org.

Support comes from Sasquatch Books, announcing The Breath of a Whale, stories of nature's remarkable creatures of the deep, from the author of The Hidden Lives of Owls.

To find out if a crow can recognize an individual human face, Professor John Marzluff of the University of Washington bought a caveman mask. He wore the mask while trapping, banding, and then releasing seven crows on campus. He describes what happened later when he walked through the campus wearing the mask:

JM: ….Man…it was automatic! [Crows scolding] I had a big group of birds on me scolding me and coming at me when I wore that Caveman mask… you know, they scolded mostly closely to where we had caught the birds initially, but over time, that spread, and we had more and more birds involved scolding us and typically after a couple a years of doing the walking, no more trapping, we would have about 50% of the birds we encounter, scold us.

So the knowledge that this is a strange-looking and dangerous face seemed to be spreading and that suggested pretty strongly that they indeed were keyed in on this face…because when we wore the other mask…or no mask at all, we did not get this sort of response.

MM: Marzluff and his team conducted more detailed experiments using realistic faces and new locations. They found the birds could identify the threatening people. As for how and why the crows spread the information?

JM: … I think it’s one of the, if not THE most important function of a mob… It’s a benefit to survival to point out and recognize challenges in your environment!