What 30 years in the field can teach you! 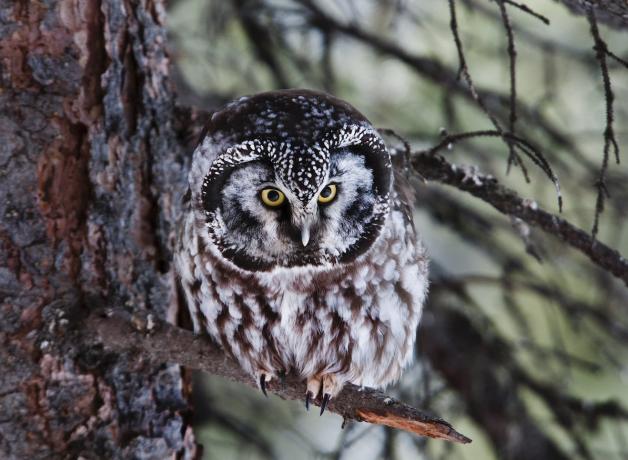 Denver Holt has spent more than 30 years studying the birds in the field. No wonder he can sound so much like this Boreal Owl! Holt conducts field research on eight species of owls in Alaska and Montana. He says, "I think winter is a blast! We all love trapping and banding in the wintertime. It's what we're doing right now -- trapping and banding Long-eared Owls and Saw-whet Owls, as part of our winter project."

You can learn more about Denver's work at the Owl Research Institute.

…By dedicating more than 30 years, as Denver Holt has, to studying the birds in the field. Holt, calling here, conducts field research on eight species of owls in Alaska and Montana. He tells us why:

“You know, for me, they’re fascinating…I think I enjoy everything about their adaptation to the environments in which they live. …You gotta have some intuitive feel about the animals that you work with and you only get that intuitive feel by being out in the field with them.

“…the scary part about this is that we’re using those data to manage our natural resources …and their based on miniature studies, short periods of time…so that’s very concerning for people like us who do long-term studies … and are proud of the fact that we’re still in the field.”

[Denver makes the call of a Northern Saw-whet Owl]

To learn more about Denver’s work at the Owl Research Institute, begin at BirdNote.org.

[Call of the Eastern Screech-Owl as given by Denver Holt]

All owl calls made by Denver Holt.  “Hoots, Toots, Calls and Clacks and Hisses” © 2002 Owl Research Institute in Charlo, MT 59824.  Used with permission.

Learn more about the Owl InstituteHere's more about Denver HoltBoreal Owl - More at All About BirdsCheck out this Long-eared Owl nestcam!