A busy little bird with a very broad diet. 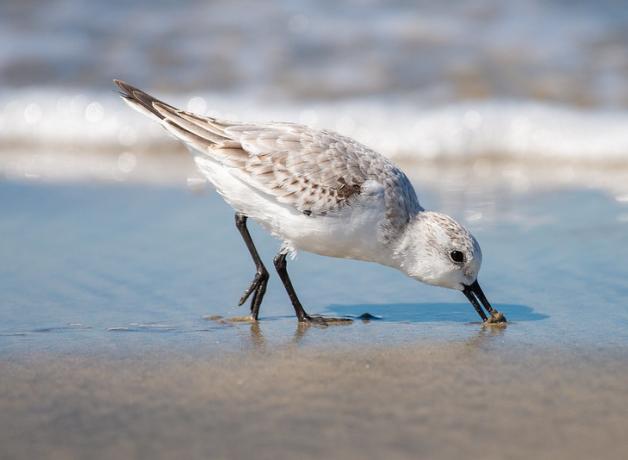 While many shorebirds have gone south, tiny sandpipers called Sanderlings are easy to find on winter shores. They follow the waves as they lap in and out, probing the swirling sand for prey. They often eat various small crustaceans such as mole crabs, isopods, and amphipods. But they also enjoy miniature clams, polychaete worms, and horseshoe crab eggs. They’ll even catch flying insects or eat plant matter.

Though most birds that enliven beaches in summer have gone south, tiny sandpipers called Sanderlings are easy to find on winter shores. They’re intensely busy birds, persistently following the smallest waves as they lap in and out.

High tide pushes burrowing invertebrates closer to the surface of the sand. As the waves retreat, the top layer of sand swirls loosely. Sanderlings rush in to probe the sand for prey with their small but tough beaks, then flee as the next wave breaks.

The diversity of a Sanderling’s diet is impressive. Various small crustaceans, especially mole crabs, isopods, and amphipods are important elements.

And a Sanderling’s dining options don’t end there. They chase invertebrates through shallow pools and pluck flying insects out of the air. In a pinch, they can turn to plants: buds, seeds, and algae.

But they’re best known for that elegant dance at the edge of the waves. Watch for them performing along most of the U.S. coast, from city shorelines to barrier islands.

Sanderlings - More at All About BirdsVideo: Sanderlings running back and forth with the waves 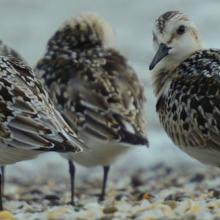 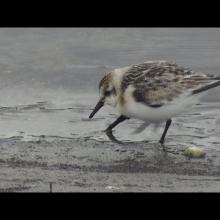