Unfortunately, they go hand in hand... 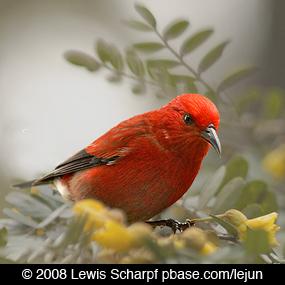 Hawaii has more bird species in danger of extinction than anywhere else in the United States. George Wallace of American Bird Conservancy explains that a long period of evolution in isolation gives rise to specialized island species. Birds that nest on the ground don't have any natural resistance to mammalian predators such as nonnative cats or mongooses. Mosquitoes carrying avian malaria are another threat. This Apapane is doing OK for now, and American Bird Conservancy is working to make sure it stays that way. Learn more at ABCbirds.org.

What Is it about Extinction and Islands?
Interview with George Wallace of ABC

This is BirdNote!
[Crash of ocean wave]
Hawaii has more bird species in danger of extinction than anywhere else in the United States. [Song of an I’iwi – here and in background throughout] We asked George Wallace, Vice President for Oceans and Islands at American Bird Conservancy, what created such vulnerability:
GW Track 37:29+  “A place like Hawaii... that arises volcanically, out of the ocean with nothing on it, will have to be colonized from afar… And that can take millions of years but every bird has to fly to that island… there was a finch ancestor that gave rise to all the Hawaiian Honeycreepers [Song of an I’iwi] and there were… strong flying thrushes that would have made it to Hawaii and given rise to the species we have there today… [Song of an Omao].

And plants would have had to have floated there like coconuts or … the seeds of Ohia are very very tiny and probably…blew on the wind to get there.

So you have these sort of long slow processes of organisms dispersing to islands like Hawaii and then a long period of evolution in isolation, which gives rise to the specialized and unique island species, and… many of the birds nested on the ground and don’t have any natural resistance to mammalian predators like cats or mongoose, or some of the other things that have been introduced.

“State of the Birds, United States of America, 2009” http://www.stateofthebirds.org/2009/habitats/hawaiian-birds