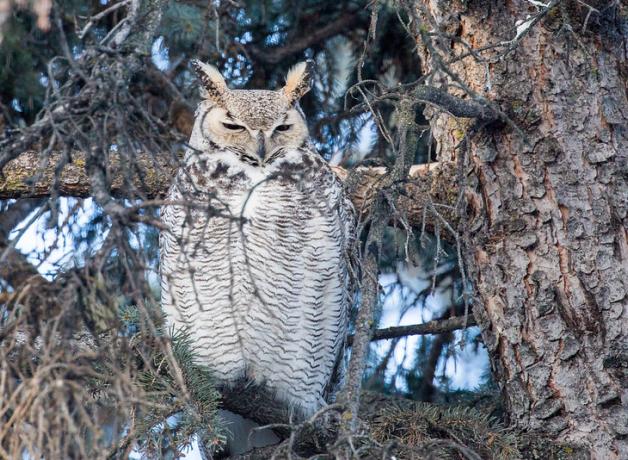 Thanks to Harry Potter, the owl is flying high. But throughout history, the owl has received mixed reviews. The Greeks believed an owl flying over a battlefield foretold victory, while in other cultures, owls were considered omens of death, prophets of doom. Listen to the story again, and you'll hear four different owls. The owls heard in this story, in order, are the Barred Owl, Barn Owl, Long-eared Owl, and Great Horned Owl. To learn more about owls, visit Cornell's AllAboutBirds.

This is BirdNote!
[Call of the Barred Owl]
Thanks to the adventures of Harry Potter, the owl is flying high. But throughout history, these birds have received decidedly mixed reviews. The Greeks believed an owl flying over a battlefield foretold victory, while the ancient Romans considered owls to be omens of death, portenders of doom. Certainly the scream of a Barn Owl in the night can be hair-raising. [“Keeerrr” of a Barn Owl]
Aesop recounted fables of wise old owls. And Native American stories portrayed the owl as all-seeing. Perhaps it’s the unblinking stare, the intense focus, which gives that impression. [“Who-Who” call of Long-eared Owl]
According to researcher Mark Cocker, many African cultures saw the owl as a bringer of illness, a “witchbird.” That reputation nearly caused the downfall of the Congo Bay Owl, which was hunted to the brink of extinction.
But there’s some good owl news. In 1996, the Congo Bay Owl was rediscovered, after not having been seen for 45 years. Today, conservation groups from around the world are joining forces to protect the rainforest where this owl and others live.
[Call of the Great Horned Owl]
Barred Owl… Barn Owl… Long-eared Owl… and Great Horned Owl … listen to all these owls again, on our website, BirdNote.org. I'm Mary McCann.
###

Owls - More at All About BirdsMore about owls in world mythology 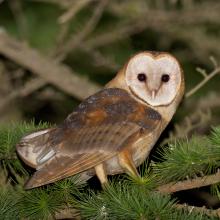 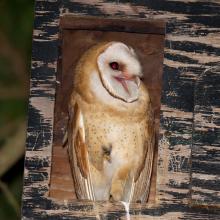