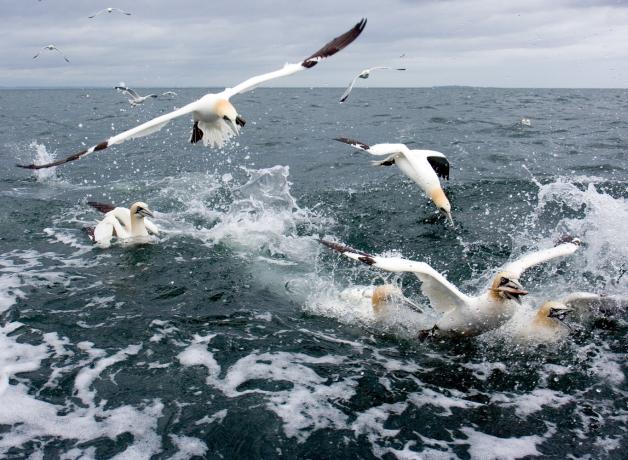 Northern Gannets, fish-eating seabirds, dive headfirst into the ocean at speeds of up to 60 miles an hour, pursuing their prey. Sometimes, they get help. Dolphins herd fish into dense, frantic concentrations near the surface, while gannets take advantage and plunge into the shoals from aloft. Scientists call this a multispeciesfeeding association, a frequent phenomenon on the ocean’s surface. This may seem like evidence of cooperation between species, but it’s more about opportunity. Kittiwakes and gulls, as well as seals and whales, may join in, too.

Gannets and Dolphins Enjoy a Feast

Northern Gannets are fish-eating seabirds. And they’re incredible hunters, aerodynamic, wings tucked back behind them, diving headfirst into the ocean at speeds of up to 60 miles an hour, pursuing their prey under water with powerful strokes of their webbed feet. But sometimes, even Northern Gannets get a little help.

Foraging pods of dolphins regularly herd fish into dense, frantic concentrations near the surface, where the fish are easier to catch. As this happens, gannets begin plunging into the shoals from aloft. The more tightly massed and closer to the surface the fish are, the better the birds’ chances of catching some. So the dolphins’ tactics are a kind of “assist” to the gannets.

Scientists call this a multispecies feeding association, and it happens a lot. These gatherings may seem like evidence of cooperation between species, but in fact they’re more about opportunity. Gannets, at the very least, take advantage of the dolphins’ predatory, fish-herding strategy to more easily grab a meal.

These feeding frenzies may attract a mix of predators. Other seabirds like kittiwakes and gulls, as well as seals and even whales, may join the action. 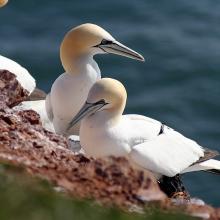