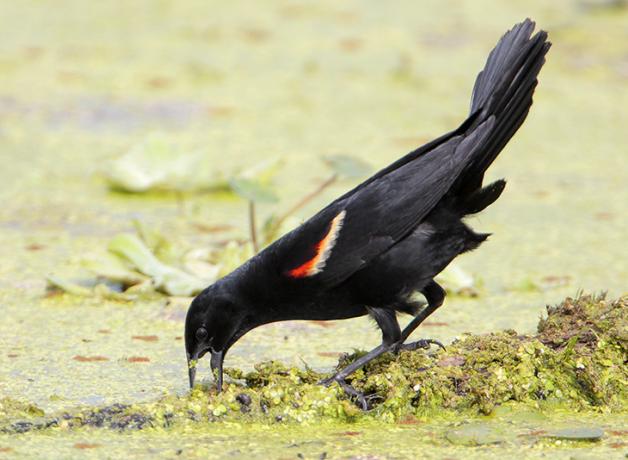 Gordon Orians describes an unusual adaptation in blackbirds called gaping: "...the ability to forcibly open the bill against some pressure, so that a bird can push its bill into the base of a grass clump, and forcibly open it, which reveals the insects that may be down hidden in the base. ... Most birds use their most powerful muscles to close the bill, because they grab or crush seeds. Many blackbirds (like this Red-winged Blackbird) have stronger muscles for opening the bill, so they can generate pressure..." to get at their prey.

An interview with Gordon Orians, Ph.D.

Today, we’ve invited BirdNote science advisor, Dr. Gordon Orians, to discuss an unusual adaptation in blackbirds, a family of birds on which he’s a world-renowned expert.

“Blackbirds have an unusual method of foraging, which is called “gaping”. And what gaping is is the ability to forcibly open the bill against some pressure, so that a bird like a meadowlark [Song of the Western Meadowlark] can push its bill into the base of a grass clump, forcibly open it, and that reveals the insects that may be down hidden in the base. Now, what’s unusual about this is that most birds have their most powerful muscles for closing the bill, because they have to snap or grab or crush seeds, or do something…The blackbirds that are powerful gapers have stronger muscles for opening the bill than they do for closing it, so they can generate quite a bit of pressure to open the bill.

The shape of the head in these blackbirds is such that they can focus their eyes forward and see right down to where the tip of the bill is, so anything that’s exposed, they can look straight at it.”

Although they’re not blackbirds, starlings also gape as they work over a lawn. [Songs of several European Starling]

You can see what Gordon Orians is talking about, on our website, birdnote.org. I’m Mary McCann.

Red-winged Blackbird - More at All About Birds