Maybe it's time for a trip to Hawaii! 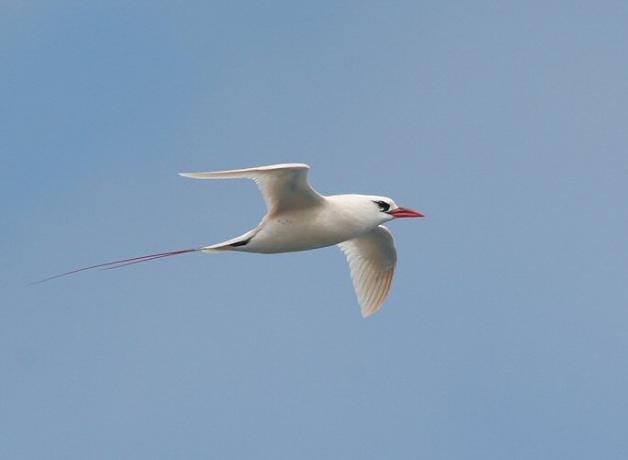 With the strong, direct flight of a falcon, a tropicbird can catch a flying fish on the wing, or plunge like an arrow into the sea and — with its serrated bill — capture a squid. Three species of tropicbirds range through most of the tropical latitudes of the world's oceans, and have done so for 60 million years. These are the Red-tailed Tropicbird, (like this one), the White-tailed Tropicbird, and the Red-billed Tropicbird.

This page is sponsored by an anonymous BirdNote fan.
Thanks for supporting the new BirdNote.org, coming in 2020!

Picture a streamlined, sparkling white seabird, with a red spear of a bill and luxuriantly long tail-streamers. With the strong, direct flight of a falcon, a tropicbird can catch a flying fish on the wing, or plunge like an arrow into the sea and—with its serrated bill—capture a squid. [Red-tailed Tropicbird vocalizations]

Birds of such elegant natural design seem creatures of myth. And in fact, their scientific name links directly to Greek mythology, as tropicbirds belong to the genus Phaeton. Phaeton, the son of Apollo, hurtled through the sky in the chariot of the sun, only to plunge into the River Eridanus.
Myth, sun, and sea — there’s that warm ocean breeze again. Maybe it’s time for a trip to Hawaii. Visit the island of Kauai, and you can easily see one of these near-mythical birds, its glistening white form floating in the air just beyond a sea cliff’s edge. [Hawaiian slack key melody]

Tropicbirds have ranged through most of the tropical latitudes of the world’s oceans for 60 million years.

For BirdNote, I'm Mary McCann. If you know someone who might enjoy today's program, send them to our website, BirdNote.org. 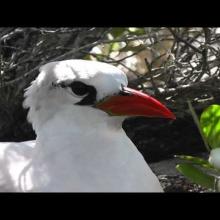 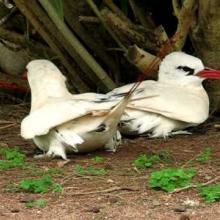