Summer in a colony, winter in solitude... 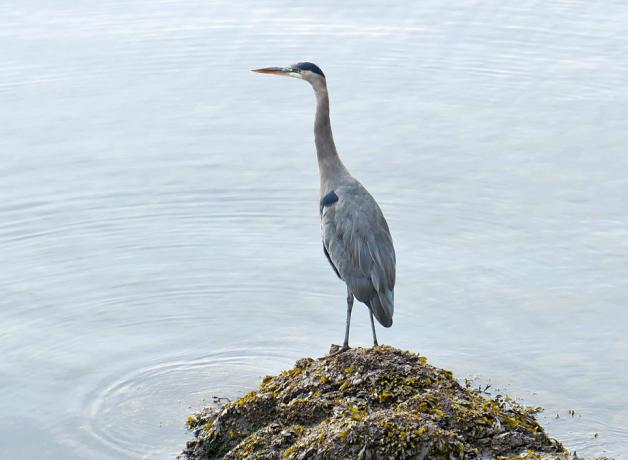 Great Blue Herons nest in colonies, in adjoining trees or with several nests in one tree. But by autumn, the adults and gangly young have left the nests to take up solitary lives, a pattern that is the reverse of many other species. After all the "togetherness" of the nesting colonies, the Great Blue Herons spend the off-season by themselves.

This is BirdNote!
[Waves splashing on shore and kronk, kronk, kronk of Great Blue Heron]
That prehistoric-sounding call is from a Great Blue Heron. This tall, stately bird is commonly seen standing alone on beaches, in marshes, on docks and pilings, even on tree branches. Watching.  Waiting.
[Heron colony vocalizations]
Now, from earlier this summer, the raucous sound of a colony of nesting Great Blue Herons.
[Heron colony vocalizations]
Herons collect into groups for nesting, constructing their spartan stick nests in adjoining trees. Several nests may be crammed into one tree.  As many as 60 nests in a colony can create quite a frenzy!  Nesting in large colonies helps protect the young from predators.
But by this time of year, the adults and gangly young have left the nests to take up solitary lives along beaches, marshes, lake-edges, and rivers. After all the “togetherness” of the nesting colonies, the herons spend the off-season by themselves, a pattern that is the reverse of many other species.
During fall and winter, they defend the areas where they feed as adamantly as other birds defend their nesting territories in spring. The herons challenge and scare away intruders, including other Great Blue Herons, by sounding this call.
[Single Great Blue Heron calling]
It may sound strange, but it’s one beautiful bird. Got a photo? Share it with our listeners. Begin at our website, BirdNote.org. I’m Michael Stein.
###