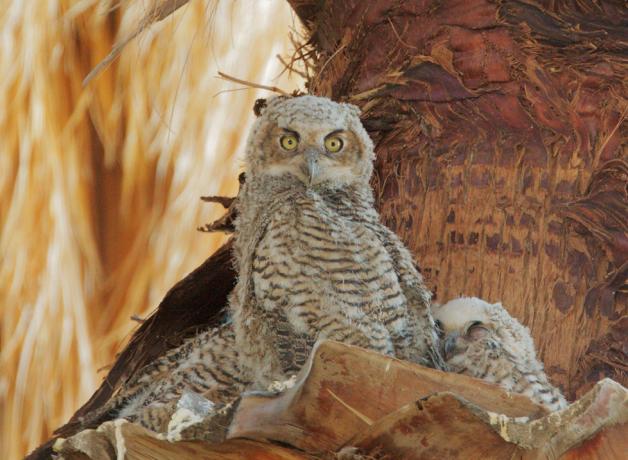 Great Horned Owls are found in more varied habitats than any other owl in North America. These owls often nest in trees, but may also nest on cliffs in arid areas far from trees. They nest early in the year, even in the dead of winter. The young hatch a month later, vocalizing inside the egg a few hours before they emerge.

If you'd like to make a gift to BirdNote, begin here.

This is BirdNote!
[Sounds of young Great Horned Owls begging]
That’s the sound of avian teenagers begging for their next meal. It’s what Great Horned Owl parents have to put up with in the spring.
[Repeat begging calls]
Great Horned Owls nest early in the year [Call of an adult male Great Horned Owl], sometimes laying eggs as early as January, or even December in the far south. The young hatch a month later. Owlets actually begin vocalizing inside the egg a few hours before they emerge. This may serve to alert the female parent to the impending event.
When they first leave the nest at about six weeks, the young birds have not yet learned to fly. They climb out onto branches near the nest for a couple of weeks before they begin to follow their parents on hunting sorties.
[Call of an adult male Great Horned Owl]
Even then, the parents must continue to feed them. Learning to survive in the owl world takes skill and training, so young owls remain near their parents, often into late summer or early fall.
Just after dusk, listen for these distinctive calls, and picture a Great Horned Owl parent hunting for still more rodents to feed its insistently begging young.
[More begging calls]
For BirdNote, I'm Mary McCann.
[Calls of a pair of adult Great Horned Owls]
###

Call of the Great Horned Owls provided by The Macaulay Library of Natural Sounds at the Cornell Lab of Ornithology, Ithaca, New York. Begging calls of the owlets recorded by D.S. Herr and by D.T. Spaulding. Calls of the adults recorded by W.L. Hershberger and by W.R. Fish.
Producer: John Kessler
Executive Producer: Chris Peterson
© 2010 Tune In to Nature.org           June 2010/2021 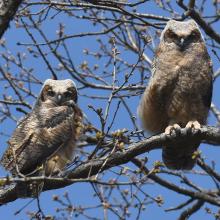