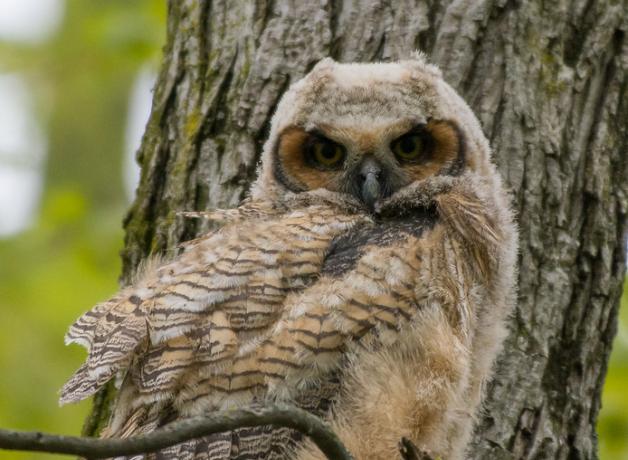 This Great Horned Owlet - about 2-1/2 months old and already as big as its parents - is quite well feathered, although its underparts remain downy. Its wing and tail feathers are developing nicely, and it has begun to make short flights. By mid-May, the owlet still relies almost entirely on its parents for food, and will stay with the family for months to come.

High in a tall cottonwood tree, a pair of Great Horned Owls is tending two nestlings. The young owlets emerged from their eggs in early spring. When the young birds finally put on a second set of down feathers, the parents could leave them alone while they hunted.

By mid-April, the nestlings were already showing their namesake ear-tufts. About that time, they began to leave their big stick nest to climb along the tree’s branches. What a noisy pair, waiting impatiently for their parents to deliver food! [Immature owl begging cries]

Now in May, the Great Horned Owlets are as big as the adults. Their wing and tail feathers have developed nicely, so the owlets have begun making short flights. Yet they still rely almost entirely on their parents for food. [Immature owl begging cries]

On a recent evening, the adults presented the owlets with a young striped skunk, at two pounds, a sizeable – if somewhat odiferous – meal. These owls are the only birds that regularly dine on these smelly creatures. [Great Horned Owl pair hooting]