Great-tailed Grackles on the Move

This grackle’s story is one of expansion 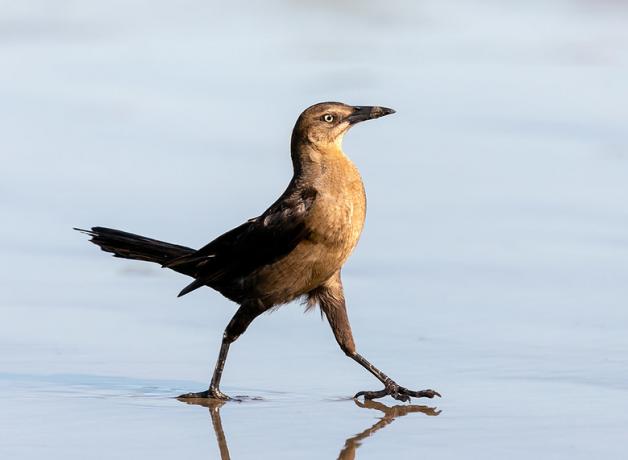 The range and abundance of the Great-tailed Grackle have expanded significantly since 1900, when the species barely reached Texas from Mexico. One winter roost of grackles in South Texas was pegged at 500,000 birds! Great-tailed Grackles can present pest management problems for agriculture and sanitation issues in urban areas. It’s worth noting that human alterations of the natural landscape invited the grackles in.

Great-tailed Grackles On the Move

This startling voice — one of cracks, clatters, wheezes, squeals, and trills — belongs to a male Great-tailed Grackle. Picture a very large blackbird, glistening with blue iridescence. Male Great-tailed Grackles are all of a foot and half long, and slender, with a long, spike-like beak and a very long tail, folded narrowly in the shape of a boat’s keel. Females are brown, and 25% smaller.

The Great-tailed Grackle’s big story is one of expansion. In 1900, the species barely reached into Texas from Mexico. By 2000, it was found through much of the American Southwest. One winter roost of grackles in South Texas was pegged at 500,000 birds. [Huge flock of Great-tailed Grackles] Its leap in population has coincided with the advent of large-scale irrigation, industrial agriculture, and rampant urbanization.

In their vast abundance, they present pest management problems for agriculture and sanitation issues around cities and towns. But it was, of course, these very human alterations of the natural landscape that invited the grackles in. We may as well enjoy them, because they’re here to stay.

[Repeat some of introductory song] 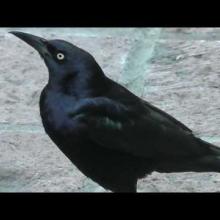