Black, white, gray... how do you sort them all out? 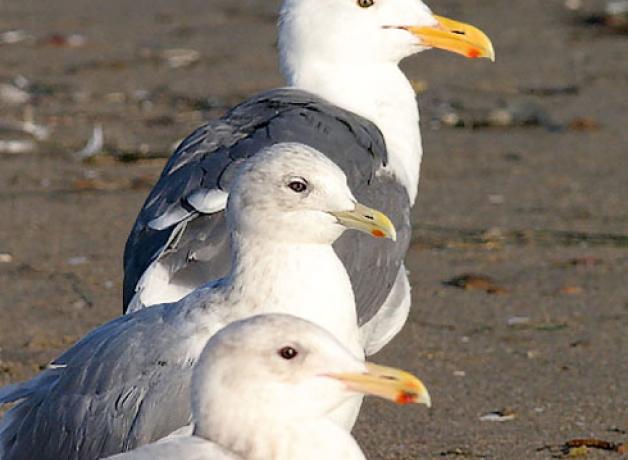 Relatively few gull species are common nesters in the Lower 48. But in October, both the variety and number of gulls increase dramatically. Gulls that nested in Alaska or Canada fly south to spend winter in more temperate climates. Western Gulls are present in the West all year, mostly near the coast. Mew Gulls turn up in the winter along the West Coast, and Herring Gulls can be seen in the East. October is an ideal time to learn which gull is which. Seen here, top to bottom, are Western, Thayer's, and Glaucous-wing Gulls.

This is BirdNote!
[Bugling or other loud calls of Glaucous-winged Gulls]
Gulls, to be sure, present a kind of Sunday crossword puzzle of bird identification. Their similar overall coloration of black, white, and gray – and plumages that change both with the seasons and a bird’s age – can be mind-boggling.
Gulls are a year-round fixture of coastal waters and many locales in the interior of the continent. [Bugling calls of Glaucous-winged gulls]
Yet despite what may seem an unchanging picture, major shifts take place each year in local gull concentrations. [Continuing calls of Glaucous-winged gulls]  Relatively few gull species are common nesters in the Lower 48.  But in October both the variety and number of gulls increase dramatically. Gulls that nested in Alaska or Canada fly south to spend winter in more temperate climates.
Along the West Coast, petite, dove-like Mew Gulls [Mew Gull cries in the background], which made the Alaskan tundra their summer home, now mix with the locals. In the East, millions of Herring Gulls [calls of Herring Gulls] and small numbers of Iceland Gulls spread out along the coast.
In fact, 15 or more gull species regularly turn up in total along our coasts, making October and late fall an ideal time to learn to identify gulls. [Cacophony of gulls]
Can’t solve the puzzle? Visit BirdNote.org for tips on how to tell which gull is which.
###
Bird audio provided by The Macaulay Library at the Cornell Lab of Ornithology, Ithaca, New York. Glaucous-winged Gull variety of calls recorded by A.A. Allen.  Mew Gull calls recorded by W.W.H. Gunn. Herring Gull calls recorded by Martha Fischer.
Producer: John Kessler
Executive Producer: Chris Peterson
© 2014 Tune In to Nature.org      October 2016     Narrator: Michael Stein

Western Gulls - More at All About BirdsIdentifying gulls: which gull is which? 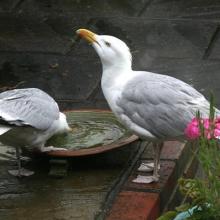 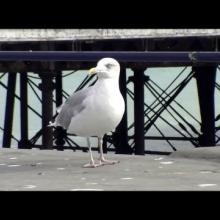 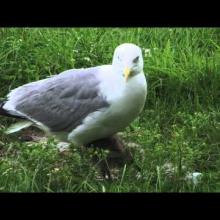