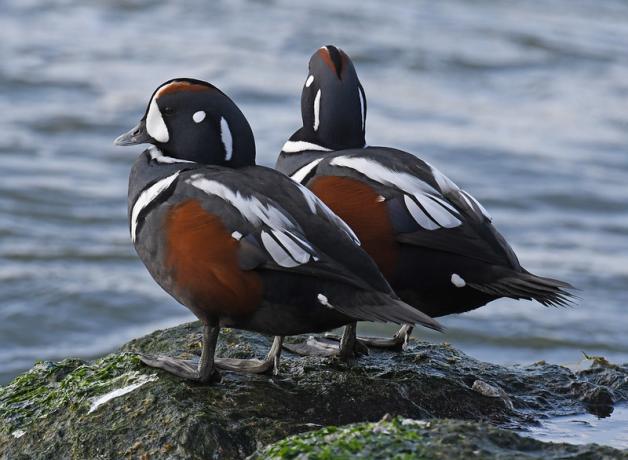 Some ducks don't sound like ducks at all. Some, like the Harlequin, squeak. Harlequins are unique in other ways, too. Quick and agile in rushing white water, they dive to the bottom of mountain streams for food, and use fast-flowing rivers for breeding. If you're lucky enough to spot a Harlequin Duck, you may guess how it got its name. Dressed in vivid multi-colored patches, Harlequin is the jester of traditional Italian comedy.

If you'd like to make a gift to BirdNote, begin here. Thanks!

This is BirdNote.
[Call of the Harlequin Duck]
Some ducks don’t sound like ducks at all. Some — like the Harlequin — squeak, earning them the nick name of “sea mice.”
[Call of the Harlequin Duck]
Harlequins are unique in the duck world in other ways as well. Alone among North American waterfowl, Harlequins breed along fast-flowing rivers and streams. Quick and agile in rushing white water, they dive to the bottom of mountain streams for food.
[Rush of fast flowing stream]
What kind of a name is “Harlequin” for a duck? If you’re lucky enough to spot one of these rare birds in winter, perhaps along a rocky shore of the Puget Sound in Washington or Penobscot Bay in Maine, you may guess the answer.
[Waves on rocky shore]
Dressed in multi-colored patches, Harlequin is the jester of traditional Italian comedy. The male duck with the jester’s name is just as striking, with his slate-blue feathers and vivid white, black, and chestnut markings.
The rigorous lives of Harlequins require great adaptability – transitioning from fresh water to salt, from meals of caddis fly larvae to crabs and barnacles. Some, in fact, migrate by traveling directly downstream from the mountains to the ocean. Constant, however, is their unmatched ability to swim and feed in the turbulent waters where they live.
[Call of the Harlequin Duck]

Today's show is brought to you by Forterra. Creating great communites and conserving great lands in Washington State.

Harlequin Duck - More at All About BirdsMake a gift to BirdNote 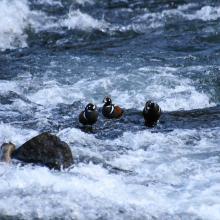 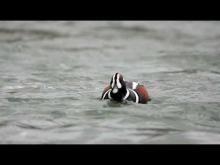 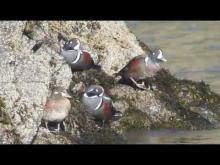