The Heron and the Snake

It's a rough world for a young Great Blue Heron 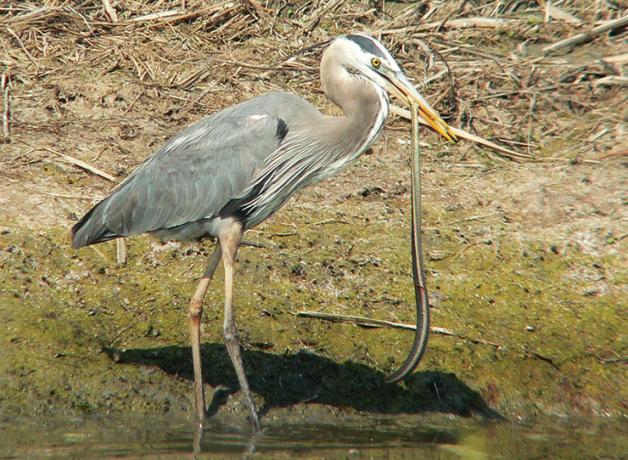 It's a rough world for a young Great Blue Heron. A mere one egg in ten results in an adult heron. Only a little more than 25% of fledglings survive their first year. Michael Hobbs witnessed a battle between a young heron and a snake. Successful foraging takes practice. In a trial-and-error world, how often does an inexperienced bird get a second chance? Fortunately, nearly 75% of yearlings will survive to adulthood.

Do you have a story to tell us about a bird? Click here to drop us a line with your story. Thanks!

BirdNote®
The Heron and the Snake
As told by Michael Hobbs

It is morning. A light rain is falling on Marymoor Park, east of Seattle. Today, bird-watcher Michael Hobbs, who has been monitoring the birds of Marymoor for many years, will witness something very unusual.

In the slough that runs through the park, a young Great Blue Heron and a blue-striped garter snake are locked in a desperate struggle. The heron’s trying to swallow the snake – tail first. The snake, understandably, isn’t happy – it’s biting the heron on the back of the neck. The heron pulls its head back – the snake is stretched taut like a kid's elastic toy. Predator and prey are at a stalemate.

Finally, the heron’s had enough. There’s got to be an easier way to eat, right? It spits out the snake. But the snake still has its teeth in the back of the bird’s neck. The heron jumps and flaps, trying to shake it loose. And eventually, the snake lets go – and drops into the water.

BOOM! The heron strikes – going for the head. The snake recoils. "I should’ve held on." It twists, writhes…and goes limp.