Getting to know one of America's most common birds... 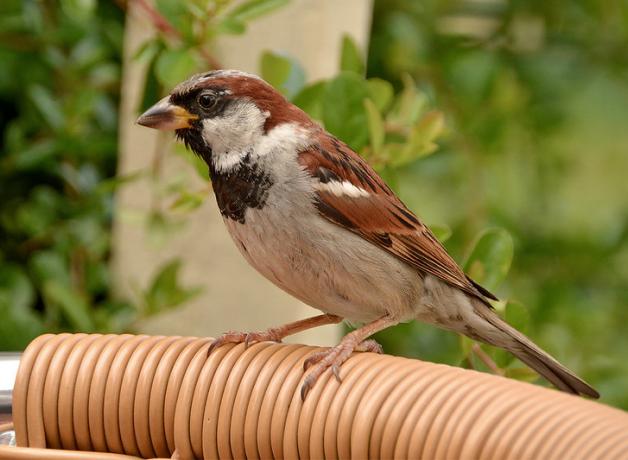 The House Sparrow was first introduced into the US from England in the 1850s and has spread across the country. The name "House Sparrow" fits it well, because – from Bangor, Maine to San Diego, and Alaska to the Panama Canal – it's found nearly everywhere people live.

[Chirping of a House Sparrow]

Thanks to a well-meaning – but misguided – soul, the House Sparrow was first introduced into the U.S. from England in the 1850s. And it’s now one of the most common birds in North America. The name “House Sparrow” fits it well, because – from Bangor, Maine to San Diego, British Columbia to the Panama Canal – and even in Hawaii – it’s found nearly everywhere people live. [Rising chatter of many sparrows in an urban setting]

A stocky little street-fighter of a bird, it’s fussy and vocal year ‘round. Sparrows often seem to be scrapping with each other, but still, they’re always in a group, almost never alone. Sometimes a bush they’ve settled in seems to be alive with their chatter, even though you can’t see a single bird. [Fussy chatter of many sparrows]

They even like to bathe together. True to their name, they prefer to nest in manmade structures or birdhouses, rather than in trees. And given a chance, they displace many of our native cavity-nesting birds from nest boxes. Emily Dickinson described the sparrow’s nest as “Sweet of twigs and twine.” There’s a lot of both in a nest, because when sparrows find a cavity they like, they’ll fill up every bit of space before laying their eggs.[Chirping of a House Sparrow]

Peer into a sparrow’s nest, on our website, BirdNote.org. I’m Michael Stein.

Check out the Wicked Local blog about this little brown birdAudubon Field Guide: House SparrowLearn more about the House Sparrow on Cornell's All About BirdsSee a female House Sparrow gathering material for her nest