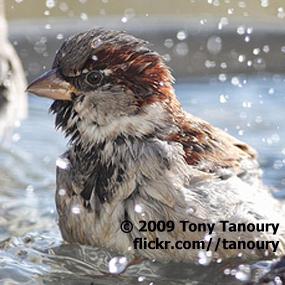 Social, chatty, ubiquitous, the House Sparrow has adapted to living in cities, suburbs, and rural areas. Like most birds, these sparrows enjoy a daily bath. Set out a birdbath, and you can watch them chatter, splash, and shake, sending droplets flying. Birds like very shallow water; an inch or two is plenty. Be sure the bath has a flat rim or rocks to perch on. And make sure the area is safe from cats. Would you like to make a gift to BirdNote? Begin here.

This is BirdNote!
[Sounds of chattering House Sparrows]
Like preteens at a swimming pool, this flock of House Sparrows chatters as it splashes in a birdbath. [More House Sparrows chattering and splashing]
Pudgy, social, chatty, and ubiquitous, the House Sparrow has adapted to living in cities, suburbs, and rural areas. Considered by some just another “little brown bird,” a closer look reveals more: the male House Sparrow’s head is decorated with chestnut and gray, and he sports a black bib.
Like most birds, these sparrows enjoy a daily bath. By setting out a birdbath, you can watch them lower their head and shimmy down into the water, wings slightly spread. Then they pop out and shake like a dog, water droplets flying.
If you’ve ever watched a bird bathing in a puddle, you know that birds like very shallow water; an inch or two is plenty. Be sure your birdbath has a flat rim or rocks for the birds to perch on to shake and dry.
If you aren’t interested in setting out birdfeeders, installing a birdbath can be an entertaining alternative. These chattering, gregarious House Sparrows may be the first to arrive.
[More chattering and splashing]
You, too, can “make a splash,” on our new website, birdnote.org! We’ve been telling all the stories. Now it’s your turn to tell yours! Or read what others have to say – you choose, it’s your site! [Say slowly] birdnote.org.
###
Bird sounds provided by The Macaulay Library at the Cornell Lab of Ornithology, Ithaca, New York. Recorded by W.W.H. Gunn. Ambient sounds provided by Kessler Productions.
Producer: John Kessler
Executive Producer: Chris Peterson
© 2012 Tune In to Nature.org   May 2012   Narrator: Michael Stein
ID#053105HOSPKPLU HOSP-01b

House Sparrow - More at All About BirdsYou can make a gift to BirdNote. Thanks!