How Terns Read the Water

These birds use the water as a map to their next meal. 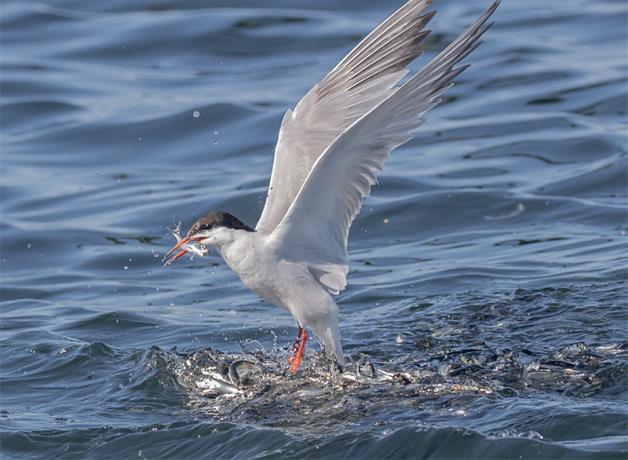 Like an expert angler, a tern can read the surface of the water to find where to catch its next fish. Scientists piloted a drone to track the flight paths of terns on the hunt. The terns sought out turbulent water. A vortex formed by colliding currents traps fish near the surface, where terns can snap them up. Terns fly toward bubbly upwellings to see if the rising water brings prey animals along with it.

How Terns Read the Water

Looking out at the ocean, we might just see a chaos of waves and troughs. But, like an expert angler, a tern can read the surface of the water to find where to catch its next fish.

Researchers studying the feeding habits of terns piloted a drone to learn how the birds zero in on good fishing spots. By flying the drone at an altitude of 100 meters, well above the feeding terns, the scientists got a detailed look at the birds’ flight paths without disturbing them from the hunt.

The flight paths showed that the terns seek out turbulent water. They tend to dive for fish where colliding currents form a vortex. The swirling water traps small fish near the surface, the perfect place for terns to snatch them up.

When the terns spot new bubbly upwellings at a distance, they fly to them, as the rising currents can bring other prey animals along for the ride.

Using drones to observe airborne birds from a safe distance is helping reveal how they see the world. For the terns, the water’s surface isn’t just nice to look at — it’s a map to their next meal.