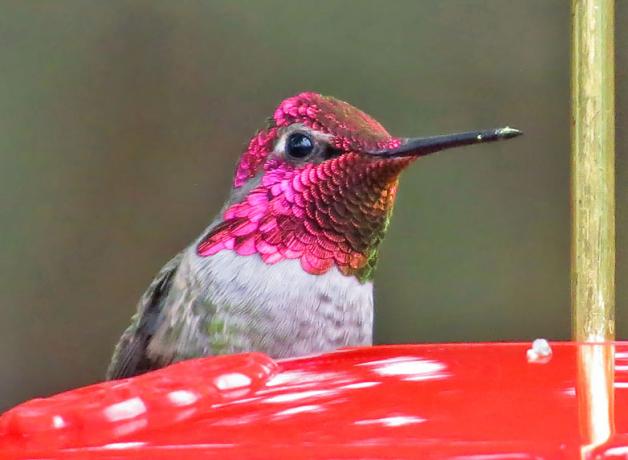 The familiar components of a hummingbird feeder include a bottle, sugar water, and something red to attract the birds. (But not the water, please! Food coloring can be harmful to hummers. Here's a healthy recipe.) Feeding hummingbirds such as this Anna’s Hummingbird may seem like a recent preoccupation for humans. But late in the 1600s, people created hummingbird brews from such unhealthy ingredients as dry white wine, cracker crumbs, and molasses. In those early days, only in the tropical colonies was cane sugar abundant and cheap enough to give to the birds.

A bottle, some sugar water, and something red. From Alaska to Patagonia, the familiar components of a hummingbird feeder. [Ruby-throated Hummingbird wing noise and chips—ML 176299, 01:55 and following]

Most of us think of this as a fairly recent preoccupation — dating to around the same time as the first airplane. [Black-chinned Hummingbird wing noise—ML 60121, 00:53 and following]

But its true lineage is much older. Late in the seventeenth century, the attorney general of colonial New England, Benjamin Bullivant, described a device he had created to feed Ruby-throated Hummingbirds. It was a small glass covered with paper on top, with holes just large enough to fit the bird’s bill. Bullivant fed his visitors on a recipe heavy in honey. Others at the time concocted hummingbird brews from such unhealthy ingredients as dry white wine, cracker crumbs, and molasses. [Music – Princess Charming by Herbert Clemendore]

In those early days, only in the tropical colonies was cane sugar abundant and cheap enough to give to the birds.

There, we’re told, a popular party trick was for a young lady of the islands to hold a sugar cube between puckered lips — drawing the jewel-like birds to hover before her face and feed.

We have a recipe for a healthy hummingbird brew on our website, birdnote.org. Check it out. I’m Mary McCann.