Hummingbirds - To Feed or Not to Feed?

Leave those feeders up a little longer in fall! 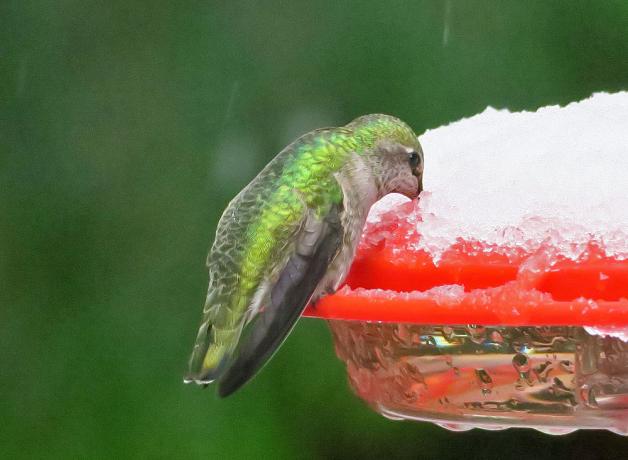 Have you wondered about the right time to remove your hummingbird feeders during fall? Consider leaving your feeders hanging for a week or two after you’ve seen the last hummingbird of the season, just in case a late migrant stops by to fatten up. However, Anna’s Hummingbirds – like the one pictured here – benefit from feeders year-round. This species is largely non-migratory, residing from California to southern British Columbia.

Hummingbirds – To Feed or Not To Feed?

Every spring, millions of people hang up hummingbird feeders to attract and feed these avian wonders. And every fall brings the question: “When do I take down my feeders? If I leave them up too late in the season, do I put 'my' hummingbirds at risk of missing the right moment to migrate, exposing them to the hazards of winter?”

Here’s the general answer: Providing food for hummingbirds in the fall will not cause them to overstay their normal migration schedule. That timing is driven largely by hormonal response to the length of the day. Leaving feeders out won’t tempt them to procrastinate. It may even help to leave feeders hanging for a week or two after you’ve seen the last hummingbird of the season, just in case a late migrant stops by to fatten up.

For those who live on the Pacific Coast, however, it’s a little different.

The species known as Anna’s Hummingbird is largely non-migratory, residing year-round from California to southern British Columbia. If you have Anna’s Hummingbirds in your neighborhood, they will benefit from the food you provide any day of the year.

Today’s show is brought to you by The Bobolink Foundation. BirdNote’s producer is John Kessler, and our executive producer is Chris Peterson. Our writers include Bob Sundstrom, Todd Peterson, Ellen Blackstone, and Dennis Paulson. I’m Mary McCann.

Anna's Hummingbird - More at All About Birds