Ivan Doig on a Birdless World 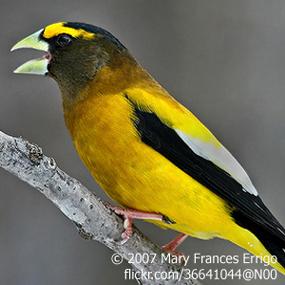 Seattle resident and renowned author Ivan Doig reflected on a world without birds in his book-length meditation, Winter Brothers (available in the BirdNote store). "A birdless world, the air permanently fallow, is unthinkable. To be without birds would be to suffer a kind of color-blindness. Occasional flashing hummingbirds; seasonal grosbeaks - masked like society burglars. - There exist few everyday necessities in my life, but birds are among them." See such a bird - an Evening Grosbeak - to the right.

Ivan Doig on a Birdless World

A world without birds? What would such a bereft planet look like? Or sound like? Rachel Carson’s ground-breaking book, Silent Spring, warned of such a birdless world. Author Ivan Doig reflects on such a world in his work, Winter Brothers:
“ .,. a birdless world, the air permanently fallow, is unthinkable. To be without birds would be to suffer a kind of color-blindness, a glaucoma gauzing over one of the planet’s special brightnesses. [Bushtits twittering] Bushtits must bounce again out there on the thin ends of birch branches like monks riding bell ropes. [Bushtits twittering]
A fretful nest-building robin – [American Robin call notes and song] we always have one or two nattering in the trees at either end of the house – must gather and gather dry spears of grass until the beakful bristles out like tomcat whiskers. Towhees, chickadees, flickers, juncos. All the creatures of this planet that do not know they have splendid names. [Call of Spotted Towhee]
Occasional flashing hummingbirds [Anna’s Hummingbird wings]; seasonal grosbeaks who arrive in the driveway and, masked like society burglars, munch on seeds amid the gravel. [Evening Grosbeak calls] Besides my wife Carol and the pulse of words across paper, there exist few everyday necessities in my life, but birds are among them.”

[Evening Grosbeak calls]
Thanks for listening to BirdNote. We’re glad you’re here. To share this show with a friend, begin at our website, BirdNote.org.
###