Jaegers Give Chase in September

Look out for this pirate! 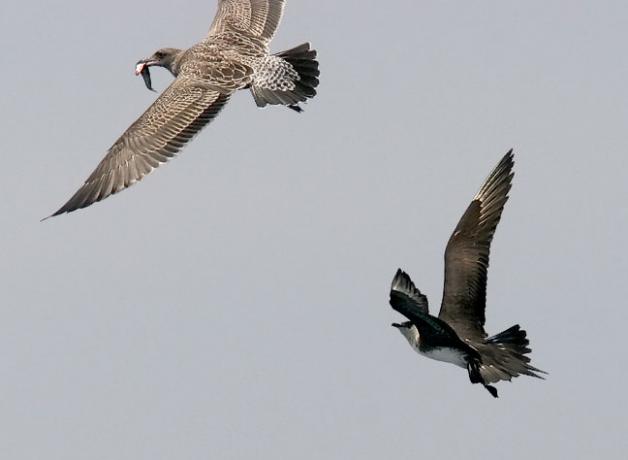 A tern or gull plunges headfirst into the water, then bounces aloft grasping a small fish in its bill. But before the bird can swallow its catch, a Parasitic Jaeger swoops in. The jaeger nips the bird's wing, and it drops its hard-won fish. The pirate catches the fish in mid-air and gulps it down. The jaeger (German for hunter) is built for sprinting speed and predatory feats.

Jaegers Give Chase in September

But before the tern can swallow its catch, a dark bird with a sharply pointed tail swoops in. The tern twists and turns in frantic flight, trying to evade its larger adversary. Back and forth they race, the dark, falcon-like bird gaining until it nips the tern’s wing with its hooked bill. The hapless tern drops its hard-won fish, which the pursuer catches mid-air, engulfing its pirated meal.

This elegant buccaneer is a Parasitic Jaeger, a relative of gulls that is built for sprinting speed and predatory feats. [Parasitic Jaeger calls] Jaeger is German for hunter, and on its Arctic tundra nesting grounds, the jaeger hunts small birds and rodents. The rest of the year, the Parasitic Jaeger spends on marine waters, living up to the first half of its name.

In the late summer and fall, watch for jaegers over inland waters, from Puget Sound to the Great Lakes to the Chesapeake Bay, especially around flocks of terns and small gulls. Or see a video of one on our website, BirdNote.org. I’m Michael Stein. 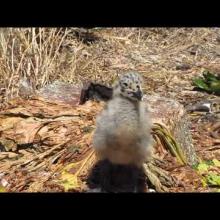