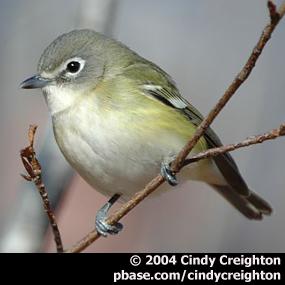 The Klamath Bird Observatory in southern Oregon uses rigorous methods to understand bird migrations and populations. At sunrise, observers record every single bird they see or hear. They record courtship displays and whether the bird is carrying food or nesting material, or singing to stake out a breeding territory. Bird-banders capture a range of species and measure body condition and age. A KBO observer will closely watch an individual bird, such as this Cassin's Vireo, day after day, through the whole breeding season.

How Do We Know How They Are Doing: Monitoring Birds with the Klamath Bird Observatory

[Song of Swainson’s Thrush]
Many birds travel at night. They filter into our woods and thickets unheralded and leave for distant points unannounced. How do we know how they’re faring? How can we tell from year to year if their numbers are rising or falling?
The Klamath Bird Observatory – or KBO – in the mountains of southern Oregon uses rigorous methods to answer these questions.
At sunrise, at randomly selected points in Northern California and Oregon [from Northern California to the Upper Rogue River Valley and east to the Klamath refuges], observers record every single bird they see or hear. They record courtship displays, if the bird is carrying food or nesting material, or singing to stake out a breeding territory, like this Black-headed Grosbeak.
[Song of Black-headed Grosbeak]
During migration and the summer months, bird-banders use mist-nets to capture a range of species, including this Western Tanager. [Song of the Western Tanager] To determine the birds’ health, they measure body condition and age.
To learn how a particular bird interacts with its environment, a KBO observer will closely watch an individual bird, such as this Cassin’s Vireo day after day, from spring until the end of the breeding season.
[Cassin’s Vireo]
At heart, these methods are akin to a spiritual discipline in their close, quiet observation, their deliberate paying of attention.
Learn more about Klamath Bird Observatory, at our website, birdnote.org.
###
Bird sounds provided by The Macaulay Library of Natural Sounds at the Cornell Lab of Ornithology, Ithaca, New York. Song of Swainson’s Thrush recorded by G.A. Keller; song of Black-headed Grosbeak by T.G. Sander; song of Western Tanager by R.S. Little; song of Cassin’s Vireo by R.S. Little.
Producer: John Kessler
Executive Producer: Chris Peterson
© 2011 Tune In to Nature.org     August 2011   Narrator: Michael Stein