Life Improved for Penguins in Argentina 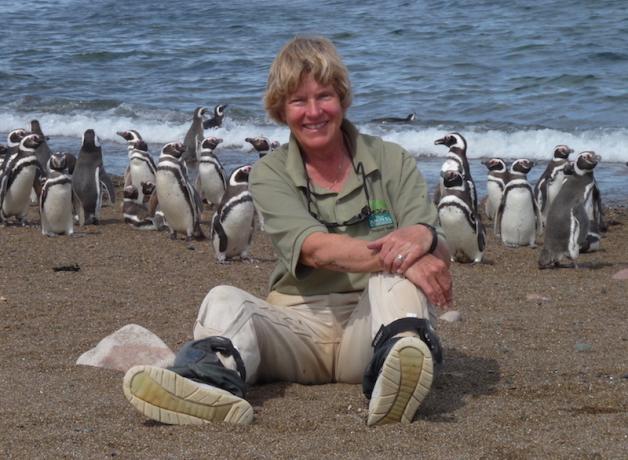 Professor Dee Boersma, working with the Wildlife Conservation Society and the Province of Chubut, has been studying the Magellanic Penguins of Argentina. "In 1983, we realized that oil pollution was really a huge problem for these birds. We were seeing birds coming ashore, covered in oil. We started bringing this to the government's attention. And in 1997, they moved the tanker lanes further offshore. Some years we get no penguins dead on the beach covered in oil." To learn more visit the Center for Ecosystem Sentinels website.

Life Improved for Penguins in Argentina:
An Interview with Professor Dee Boersma

Mary McCann:  This is BirdNote.

[Calls of Magellanic Penguins + waves throughout the show]

With the right information and motivation, people will come to the aid of birds in trouble. Professor Dee Boersma has been studying Magellanic Penguins along the coast of Argentina for more than 30 years. She describes how people speaking out helped the birds there:

Dee Boersma: When I started working on Magellanic Penguins in 1983 at Punta Tombo…. which has the largest Magellanic Penguin colony in the world, we realized that oil pollution was really a huge problem for these birds. …We were seeing birds coming ashore, covered in oil.

The reason there was so much illegal dumping is because it’s cheaper…. If you dump the ballast water from your oil tankers  [just releasing it at sea before you go in] you save a whole day of time – so you don’t have to pay the crew, you don’t have to treat the oil – It’s the penguins that pay the price.

This is a tragedy, and of course we started bringing this to the government’s attention … and we had pictures on the newspapers and in the local radio programs… and in 1997 they moved the tanker lanes further offshore. Since then, some years we get NO penguins dead on the beach covered in oil. There’s not so much of that release of the illegal ballast water, and in large part it’s because of public outcry.

I think the true motivation for conservation is when people care. And people care about penguins.

Mary McCann: There’s more to the story at birdnote.org.