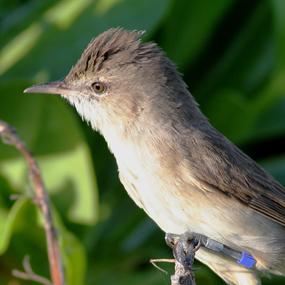 “There’s no place in the world that’s had more bird extinctions since human settlement than the Hawaiian Islands,” says Dr. George Wallace of American Bird Conservancy. Of the 42 native bird species that remain, nearly three-quarters are endangered. But there is hope: Thanks to habitat restoration and translocation efforts coordinated by American Bird Conservancy and the U.S. Fish and Wildlife Service, Millerbirds like the one pictured here are making a comeback!

“There’s no place in the world that’s had more bird extinctions since human settlement than the Hawaiian Islands,” says Dr. George Wallace of American Bird Conservancy. 1/ Before humans arrived there were 114 bird species found nowhere else in the world. 2/ But since then, more than half of these have been lost. Of the 42 native birds that remain, nearly three-quarters are endangered. It sounds pretty bleak, doesn’t it? Yet, a new and hopeful chapter is being written with songbirds called Millerbirds.

[Songs and calls of Millerbirds]

Until 2011 the last Millerbirds in the world were confined to Nihoa [Nee-hoe-ah] – [a very small, dry, and mountainous island] in the northwestern Hawaiian chain. Since then, 50 of the birds have been transported farther northwest to Laysan [LAY-san] Island, where they were once found. Laysan had been stripped of vegetation by introduced rabbits, but its natural habitat has been significantly restored by the US Fish and Wildlife Service.

Now with favorable habitat and lots of insects to eat*, some adult Millerbirds are raising two batches of young in a breeding season, even attempting a third. There are at least 120 of the birds on Laysan, 77 of which hatched there! George Wallace says Millerbirds are now in a more secure position than they’ve been for a hundred years. And their future looks bright. 4/

[Songs and calls of Millerbirds]

You can follow their progress when you begin at BirdNote.org.

Songs and calls of the Millerbird recorded by Mark MacDonald on Nihoa Island, provided by American Bird Conservancy.

© 2013 Tune In to Nature.org  December 2013  Narrator: Michael SteinSpecial thanks to Chris Farmer.