Monitoring the Health of Coastal Raptors 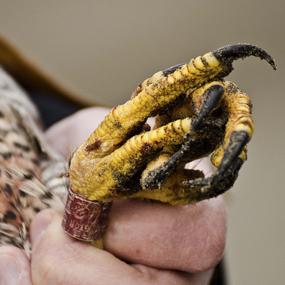 Since 1995, biologist Dan Varland, Executive Director of Coastal Raptors, has been monitoring the health of raptors on the Washington coast, where Peregrine Falcons stoop on shorebirds feeding along the tideline. He’s looking for mercury and DDT in the birds’ blood systems. Though it has been decades since DDT was discharged into ocean waters in southern California, DDT persists in our coastal environment. For better and for worse, the migration of animals links the natural world together.

Monitoring the Health of Coastal Raptors

For better and for worse, the migration of animals links the natural world together.

From 1949 to the 1970s, tons of DDT were discharged into ocean waters off the southern California coast.(1) Even now, decades later, California Sea Lions that have eaten pesticide-laden prey, migrate north as far as British Columbia. Some die and wash up on the beaches of Washington State. There they become food for avian scavengers, including Bald Eagles, Common Ravens, Turkey Vultures, and occasionally, even the Peregrine Falcon.

Since 1995 biologist Dan Varland, Executive Director of Coastal Raptors, has been monitoring the health of raptors on the Washington coast. Here Peregrine Falcons stoop on shorebirds like these Sanderlings and Dunlin feeding along the tideline.

Today we’re with Dan searching for Peregrines on the Long Beach Peninsula. In particular we’re looking for a bird Dan calls “V Over V”, whose name is derived from the visual identification band she wears on her left leg.

“V Over V” is an adult Peregrine Falcon that we banded about ten years ago on Long Beach. We do try to recapture our falcons once a year…to look for mercury and DDT and its metabolites in the blood system.”

Looking year after year is key to understanding the current and future health of these coastal birds.

To learn more [about the work of Coastal Raptors] begin at birdnote.org. 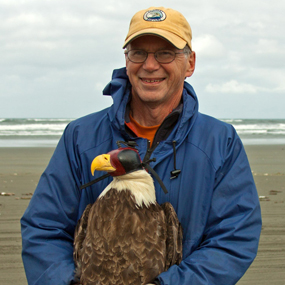 Learn more about Coastal RaptorsPeregrine Falcon - More at All About Birds