The Moon of Falling Leaves

Time to put the garden to bed for the winter! 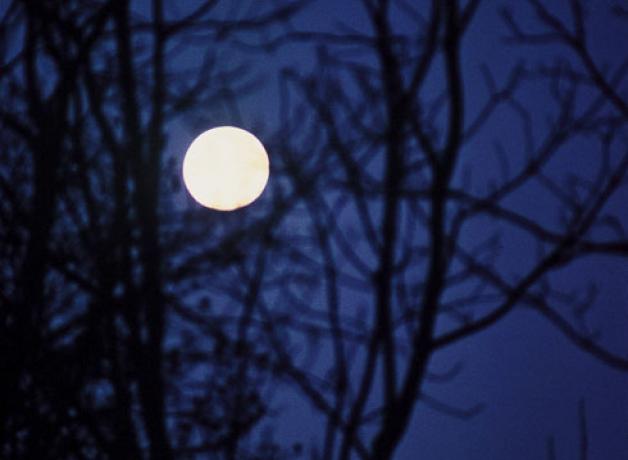 The Cree call the full moon in October "The Moon of Falling Leaves." It's almost time to stow the tools and put the garden to bed for the winter. When the trees lose their leaves, you can see the nests of summer. It's a good time to prune trees, because you won't disturb nesting birds. If you have a dead tree, you could leave it as a snag and provide spring and summer homes for cavity-nesters. There are lots of ways to make your yard attractive to wildlife. Master Gardeners can help!

BirdNote®
The Moon of Falling Leaves
Written by Ellen Blackstone

Look to the sky tonight, and you’ll see a full moon, the Hunter’s Moon—or as the Cree Indians called it, “The Moon of Falling Leaves.” It’s almost time to stow the tools and put the garden to bed for the winter. [Sound of leaves being raked]

When the trees finally lose their leaves, you can see where the oriole hung her pendulous nest. [Baltimore Oriole song] Tucked between a branch and the trunk of a tree sits the sturdy cup-nest of an American Robin [Cheerily song of a robin]. And that bulky heap of sticks, high in a cottonwood tree? It might be where a pair of Red-tailed Hawks raised a family [Keeerrr of a Red-tail]. Signs of birds are everywhere, ‘though many are now quiet.

It’s a good time of year to prune trees, [Snip, snip] because you won’t disturb nesting birds. They’re done for the season. If you have a dead tree, you could leave it as a snag and provide homes for cavity-nesters. And now is the best time to plant trees, so they can soak up the winter rains. Before you know it, the trees will leaf out again, and the cycle of life will begin anew. [Cheerily song of a robin]

Master Gardeners offer help in the garden. Maybe you can become a Master Gardener! Classes generally run winter to spring. Learn more at our website, BirdNote.org.