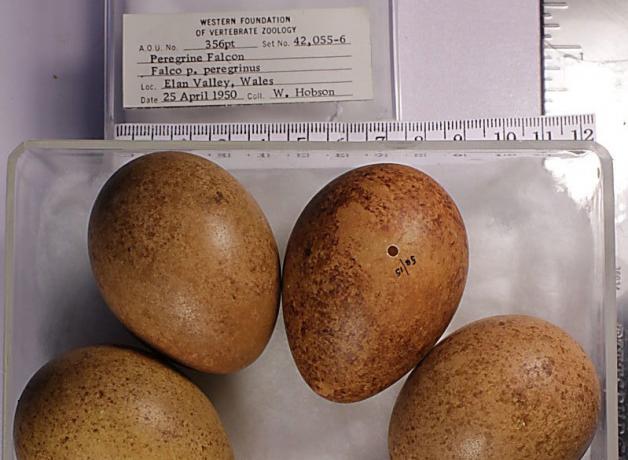 © Photograph courtesy of the archives of the Western Foundation of Vertebrate Zoology, Camarillo, California.

There are five million bird eggs stowed away in museums across the world — and the study of eggs, called oology, can give us great insight into birds. The link between DDT and the decline of Peregrine Falcon populations was identified in part using museum and personal egg collections, and this evidence helped lead to a ban on DDT. And today, Peregrines can still be seen zipping across the sky.

There are five million bird eggs stowed away in museums across the world. The largest egg collections are in the Natural History Museum in the United Kingdom and the Western Foundation of Vertebrate Zoology in the United States.

Oology, [oh-AWL-uh-jee] the study of eggs, gives us great insight into birds — their nests, the number of eggs laid, and the general nesting habitats of different bird species. Eggshells can also offer insights into the health of birds and our environment.

[Flight call of the Peregrine Falcon]
In the 1950s and ‘60s, following the introduction of the insecticide DDT, Peregrine Falcon populations plummeted across parts of Europe and North America. The birds were failing to hatch eggs — their eggshells were so thin they broke under the weight of the incubating parent.
The link between eggshell thinning and DDT was identified using museum and personal egg collections, and this evidence helped lead to a ban on DDT. Thanks in part to some empty eggs safely tucked away in museums, Peregrines can still be seen zipping across the sky.
[Flight call of the Peregrine Falcon]
For BirdNote, I’m Michael Stein.
###
Senior Producer: John Kessler
Production Manager: Allison Wilson
Producer: Mark Bramhill
Associate Producer: Ellen Blackstone
Bird sounds provided by The Macaulay Library of Natural Sounds at the Cornell Lab of Ornithology, Ithaca, New York. Peregrine Falcon recorded by Gerrit Vyn. Ambient sounds recorded by Chris Peterson in the Skagit Valley of Washington State.
BirdNote’s theme was composed and played by Nancy Rumbel and John Kessler.
© 2021 BirdNote    February 2021  Narrator: Michael Stein