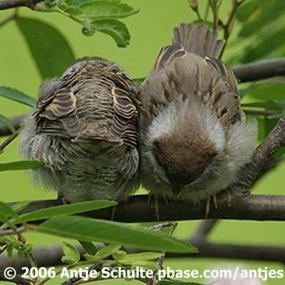 A young bird's nest is its first home. But most birds don't live in a nest year round, even at night. By August, many birds have left the nest behind. So, after they spend the day flying and foraging, where do they go at night? What most birds do at night is roost: they find a safe place to sleep, and enter it secretively so that predators don't see. Some birds - like these young Eurasian Tree Sparrows - nestle together and perch on a branch. Learn more about these sparrows at The Royal Society for the Protection of Birds.

This is BirdNote!
[Bullock’s Oriole chatter]
A young bird’s nest is its first home. For parents, like these Bullock’s Orioles, the nest is a kind of summer cottage. [Continue Bullock’s Oriole chatter] But most birds don’t live in a nest year round, even at night. By August, many of our birds have left the nest behind. So when we see them flying and foraging during the day, where do they go at night?
[Bullock’s Oriole chatter]
Renowned bird expert, Alexander Skutch, wrote an entire book devoted to showing how birds, as he says, “pass the darker half of their lives.” What most birds do at night is roost: they find a safe place to sleep, and enter it secretively so that predators don’t suspect.
Some birds sleep alone, like our visiting hummingbirds, perched on a twig among the leaves. By contrast, Violet-green Swallows, which flock by the thousands in August [Violet-green Swallow calls], may all swarm together into a small night roost in the shelter of a patch of cattails.
Other birds roost communally in enclosures we might call “dormitories.”
[Large flock of Vaux’s Swifts]
Sounds of the birds featured on BirdNote come from The Macaulay Library at the Cornell Lab of Ornithology. I'm Frank Corrado.
###
Bird calls provided by The Macaulay Library of Natural Sounds at the Cornell Lab of Ornithology, Ithaca, New York. Bullock’s Oriole recorded by T.G. Sander. Violet-green Swallow recorded by G.A. Keller.
Call of the Vaux’s Swift provided by Kevin Colver.
Producer: John Kessler
Executive Producer: Chris Peterson
© 2013 Tune In to Nature.org   August 2013   Narrator: Frank Corrado