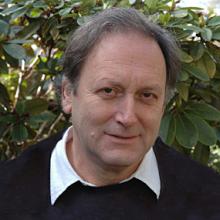 Narrator
Frank Corrado first became aware of the wonder of birds when he was a young child in the wilds of Brooklyn, New York. The long streets of his neighborhood were home to countless thousands of pigeons and nearby Prospect Park was sanctuary to a spectacular array of birds whose colors, plumage and flight fired his early imagination. Frank Corrado is a stage actor, a writer, an amateur chef and an evolving woodworker.

Browse shows that Frank has contributed to.