Given a little help, birds can be resilient 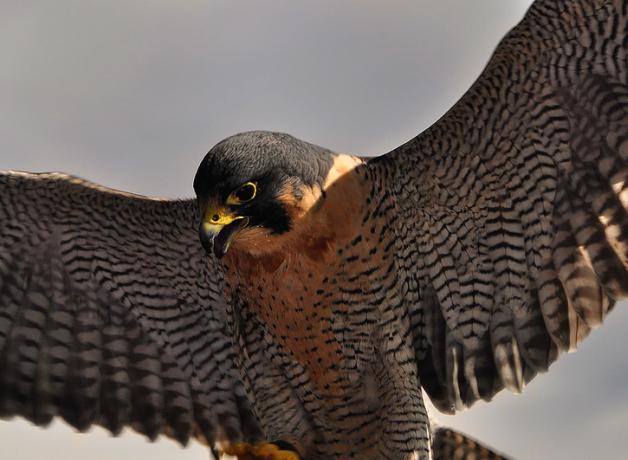 Rachel Carson's Silent Spring, which came out in 1962, linked the pesticide DDT to the decline of many birds, including songbirds. But Peregrine Falcons and other raptors had declined, too. When the birds ingested DDT, it caused their eggshells to thin and break under the weight of the incubating bird. With the ban of DDT, nesting success rebounded. Join your local Audubon chapter and find out what you can do to help all birds!

[Cak-cak-cakking of a Peregrine Falcon behind]
When Rachel Carson published Silent Spring in 1962, she linked the widespread use of the pesticide DDT to the decline of many birds. Many people first thought of songbirds. Who could have known then that this bird [Cak-cak-cakking of a Peregrine Falcon] — the Peregrine Falcon — would become both a casualty and then one of the biggest success stories of all?
Peregrines’ birth rate declined drastically because the adults ingested DDT, along with their prey. The DDT caused the birds’ eggshells to thin and break under the weight of the incubating bird. The Peregrine is at the top of its food-chain. So whatever its prey has eaten, it, too, is eating.
With the banning of DDT, Peregrines’ nesting success rebounded. In Washington State, the birds have recovered from a low of only five pairs in 1980 to more than five pairs in the Seattle area alone.  [Cakking] In New York State, where nesting Peregrines had nearly disappeared, more than 60 pairs now nest, with more than a dozen pairs in New York City itself. Peregrines were removed from the federal Endangered Species List in 1999.
[More Peregrine cakking]
For BirdNote, I’m Mary McCann.
BirdNote celebrates the everyday actions of our listeners and the work of our conservation partners to reverse the alarming decline in North American birds. Together, we can bring them back. Learn more and get involved at birdnote.org.
###
Call of the Peregrine Falcon provided by The Macaulay Library of Natural Sounds at the Cornell Lab of Ornithology, Ithaca, New York. Recorded by G. Vyn.
Producer: John Kessler
Executive Producer Emeritus: Chris Peterson
© 2013-2020 Tune In to Nature.org     January 2013 / 2020    Narrator:  Mary McCann
ID#010706PEFAKPLU            PEFA-02b-2010-01-27    PEFA-02b / SotB-PEFA-01