These trees are fully-stocked pantries for birds! 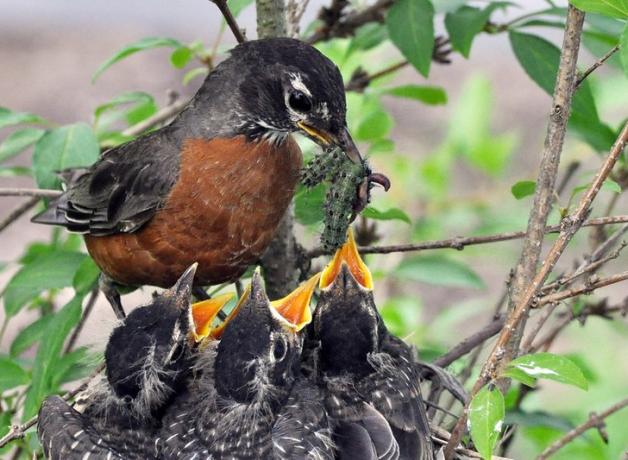 Oak trees are an important resource for birds finding insects to feed their young. It takes thousands of caterpillars from an oak tree to raise a single nest of baby birds. By planting an oak species native to your area, you can help ensure that birds are able to raise their young successfully.

This robin is making a delivery of tasty caterpillars to its fledglings. Like many songbirds, they rely on these insects to raise their young, says entomologist Douglas Tallamy.

But habitat loss is making caterpillars and other nutritious insects hard to come by. So Tallamy co-founded an organization called Homegrown National Park® to help people bring biodiversity to their own gardens — which can be as easy as planting an acorn.

Douglas Tallamy: Oaks support more species of caterpillars than any other tree genus in the country.

Hundreds of butterfly and moth species start their lives as caterpillars foraging in oak branches, making these trees a fully stocked pantry for birds like tanagers, bluebirds…

Douglas Tallamy: So when you plant an oak, you're actually planting an entire community. You're creating an awful lot of life in your yard that wasn't there before you put that oak in. That life is called biodiversity.

To learn more about Homegrown National Park® and how to take part in their simple grassroots solution to the biodiversity crisis, visit BirdNote dot org. I’m Ariana Remmel.

Homegrown National ParkNature's Best Hope: A New Approach to Conservation That Starts in Your Yard, Bo…The Nature of Oaks: The Rich Ecology of Our Most Essential Native Trees, Book b…What Sudden Oak Death Means for Birds