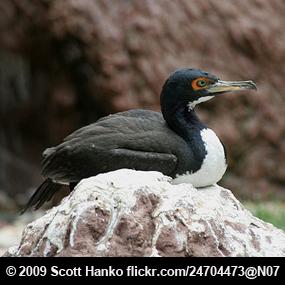 Seabird poop, known as guano, has been used to enrich soil, to make gunpowder, and believe it or not, as a skin treatment. Bird poop is a valuable commodity. South America's Pacific Coast has some of the world's largest deposits of guano, from species including the Peruvian Pelican, the Peruvian Booby, and this Guanay Cormorant. Early Andean people used guano as fertilizer, and after 19th century European colonists discovered its value in making gunpowder, more than one war was fought over it.

This is BirdNote.
[Hesitant] Today’s show is about something a little different, something a little off-color [stammering]… Okay, it’s about bird poop. There I’ve said it. [Bird poop.] To be more proper, you could call the poop of land birds “excrement” or “droppings”. Large deposits of seabird poop are referred to as “guano”.
It’s been used to enrich soil, to make gunpowder, and believe it or not, as a skin treatment. Wars have been fought over it! Bird poop is a valuable commodity.
[Moroccan music and calls of Rock Pigeons]
For hundreds of years, the tanneries of Morocco have used pigeon droppings as part of the process of making supple leather for handbags and shoes.
[Japanese music] [Song of the Nightingale]
A facial beauty treatment perfected by Japanese geishas is now all the rage in the beauty salons of Manhattan. The secret ingredient?  Shhhhh… [Music and calls stop abruptly] Powdered Nightingale droppings.
[Ocean sounds and cries of Peruvian Boobies]
South America’s Pacific Coast has some of the world’s largest deposits of guano, from species like the [Guanay Cormorant, Peruvian Pelican and] Peruvian Booby.
[Early Andean people used guano as fertilizer, and] When 19th century European colonists discovered its value in making gunpowder, more than one war was fought over the precious poop.
To this very day, The Guano Islands Act authorizes the U.S. to take possession of islands containing guano deposits.
So the next time this happens…[Splat SFX]  “Hey you, bird, I just washed my car!” – remember – bird poop can be quite useful stuff.
###
Sounds of the birds were provided by The Macaulay Library of Natural Sounds at the Cornell Lab of Ornithology, Ithaca, New York. Peruvian Booby recorded by T. A. Parker. Rock Pigeons recorded by A.L. Priori. Nightingale recorded by A.B. Van Den Berg.
Moroccan music: Tuchiya, CD -Morocco- Sounds From Ancient Lands; Various Artists; 1999 Amiata Records
Japanese music: Nil Li Zi A, Hideo Osaka Ensemble - Traditional Music of the Japanese Geisha, 2006 Legacy
Producer: John Kessler
Executive Producer: Chris Peterson
© 2011 Tune In to Nature.org          November 2011     Narrator: Michael Stein